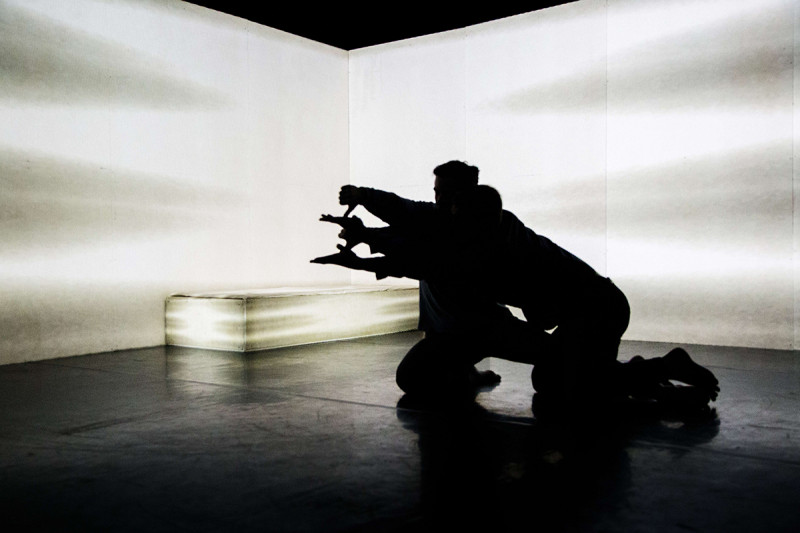 My Fitbit generally reports an average of 70 heartbeats per minute. During Muscle Mouth’s System, my BPM went up to 140. I wasn’t clapping too hard – in fact, I wasn’t moving at all. I was just that invigorated.

System is set in a dystopian world whereby, when a body becomes obsolete, it can simply be replaced. In the corner of a room (set design by Ross McCormack), this data transfer occurs. Two bodies (McCormack and Luke Hanna) spasm and merge, twitch and fuse. System is riveting and disturbing in one breath, drawing on sci-fi influences and the morbid fascination of its audience.

In System, McCormack aimed to create a simple narrative. Even going into the show knowing it, some design elements confused the concept.

A robotic, discordant, unintelligible voice occasionally cuts through Jason Wright’s otherwise incredible, transfixing sound design. Suggesting some sort of powerful overlord, the voice detracts from McCormack’s phenomenal choreography and sends the audience down what is, to my knowledge, entirely the wrong track. If there had to be a voice at all, I would have preferred a detached, clinical one – the kind you hear in a sterile hospital over a loudspeaker. And to make the plot abundantly clear, in the final blackout, I yearned for that voice to say “transfer complete.”

I also felt there were a few too many gimmicks and illusions, although they were mind-boggling. McCormack sinking into a seemingly solid block had me watching through parted fingers, and shadows cast by Natasha James’ electric lighting and AV design caught my breath in my chest. But the dancers moving the blocks around felt arbitrary at times. These sequences could have been shortened to encompass only the necessary set changes.

Nevertheless, McCormack and Hanna are at the top of their game, giving all of themselves in a performance I will never forget. Watching System is to watch masters at work. This statement encompasses everyone involved in Muscle Mouth – a company that never ceases to amaze and astound me.