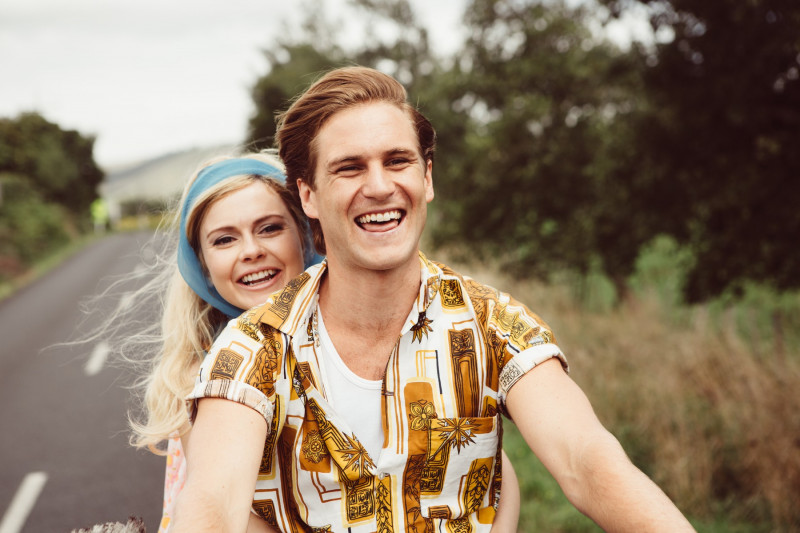 I really wanted to like Daffodils. But when the random friendly stranger next to me asked my opinion as the credits rolled, I started with “can I be honest?”

Even at 93 minutes, Daffodils dragged. Its flat characters, jarring use of a much-hyped Kiwiana soundtrack, and soapy writing made for one of the most disappointing New Zealand movies I’ve seen in years.

Based on the stage show of the same name, Daffodils is the love story of Eric (George Mason) and Rose (Rose McIver), who meet by chance on a drunken, stormy night in the Hamilton Domain. To the ire of Rose’s well-to-do parents, the pair fall madly for each other, get married, and eventually have two daughters. One of their girls, Maisy (Kimbra), narrates their (spoiler: doomed) tale through voiceover and song.

I’ll start with the good stuff: Mason and McIver work admirably with the material they’ve been given, and the set dressing is pitch-perfect (shout out to the tomato-shaped ketchup bottle in every kitchen scene).

But there are so many things that don’t work. The covers of New Zealand classics by the band Lips are at best, not bad. And in not quite the same way as a musical, where everyone in the movie participates in the song-and-dance number, Daffodils’ characters mime songs that the others can’t hear. It slows down the pace, and worse, it sticks us in emotional spaces that often don’t quite line up with the scene. The most mismatched for me is an early moment when Rose becomes fiercely jealous that her not-yet-boyfriend Eric is greeted by another girl. She has a slow-motion musical moment in the corner of the dancehall that feels completely unearned.

Moreover, the swirl of assumptions at the centre of their relationship breakdown is sitcom-level stupid, and could be solved with a five-minute conversation. What could have been a sensitive and insightful chance to look at Pākehā stoicism is given a simplistic, hugely frustrating treatment.

Yeah nah, you can probably give Daffodils a miss, eh.