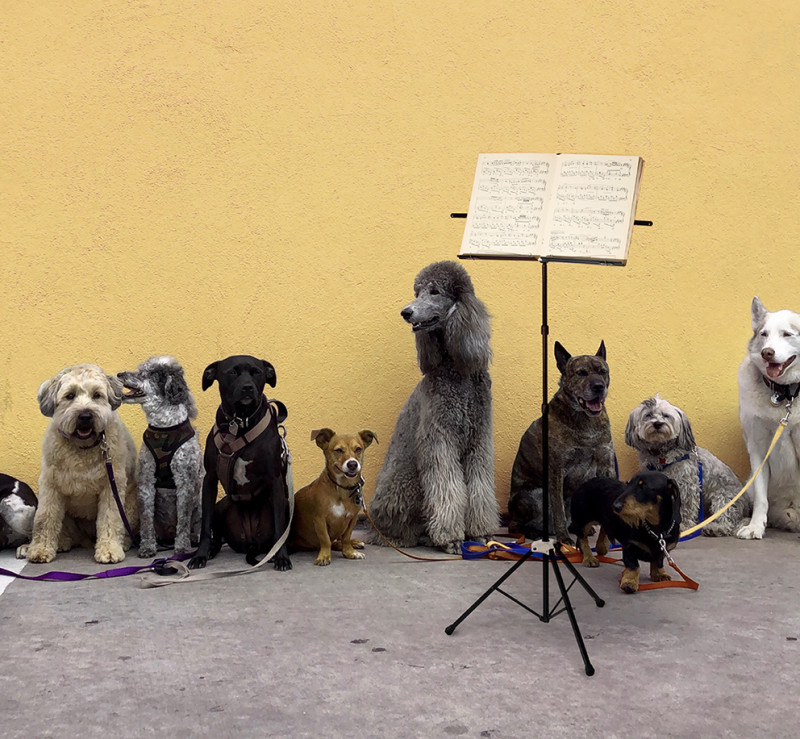 When I explained the concept of Concert for Dogs to my friends, I was met with general incredulity, then, excitement to match my own. Featuring music specifically designed for our furry friends, this is actually a concert for dogs.

Walking up to Odlins Plaza, my cousin and her two dogs were greeted by countless pups of all shapes and sizes. They came a-bounding and a-yapping, a-sniffing and a-snuffing. It was a glorious sight to behold, a sentiment echoed by one of Laurie Anderson’s first lines from the stage.

“You can’t believe what this looks like from here”, she quipped, causing a collective cackle (and at least one bemused bark). “These dogs don’t know what they’re doing here.”

How very true. Over 30 minutes, Anderson and her band played and plucked frequencies for canine ears, with discords and staccato rhythms pooling into one sound pot of chaos. Iggy Pop’s I Wanna Be Your Dog was a setlist highlight, but the rousing symphony of barks from the dogs in attendance, conducted by Anderson, took the cake.

To find out how the audience felt about the music, I interviewed them. Most of the time, the humans interrupted to answer for their dogs.

One lab apparently calmed down when the music started, one terrier perked his ears up once, and one little Pomeranian snapped and snarled at every instance of applause. “Ah yes,” his owner sighed, “he hates it when people are happy.”

Most dogs though just busied themselves meeting the masses of new friends in their midst. It was also unbearably hot with no shade, which caused a fair bit of distress.

The concert finished with a screening of Heart of a Dog, Anderson’s documentary about her rat terrier Lolabelle. From what felt like thousands, only the dogless few remained for this; it just wasn’t feasible for the dogs to sit through an hour-and-a-half film on the concrete in such heat.

In Wellington at least, Concert for Dogs needs a serious logistical overhaul for the comfort of the audience – everyman and everydog alike.