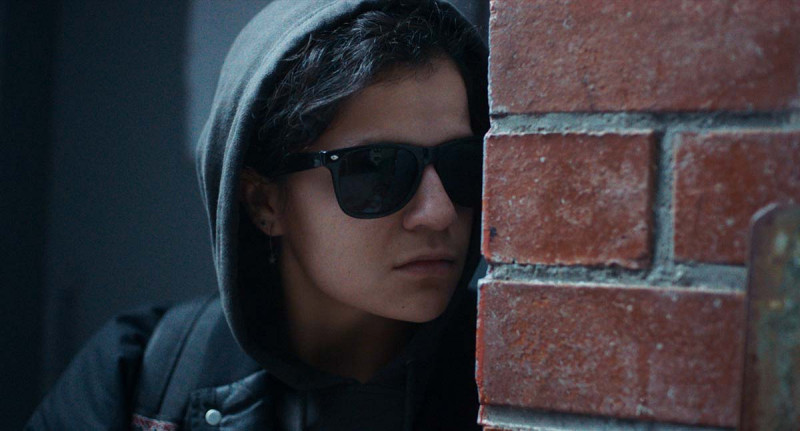 When panic attacks by Sam Hollis

In 2013, writer-director Michelle Savill was about to board a plane to attend the Clermont-Ferrand International Short Film Festival in France. Just one little snag… the flight had left 24 hours beforehand. She didn’t have the $3000 cash needed to book another one, and although an employee helped her onto a plane the following day, the panic was real.

Once the dust settled, Savill found friends and family had experienced similarly mortifying moments. Millie Lies Low, her debut feature co-written with Eli Kent, places its titular character in the same circumstance, but cranks the anxiety up to 11. When a panic attack causes Millie, played by Ana Scotney, to miss her flight to New York to undertake a prestigious scholarship, she decides to fake it till she makes it – posting Photoshopped images to Instagram, hastily throwing a New York map on the wall behind her whenever a friend attempts to FaceTime.

Savill wrote vulnerably, and as a result, sees much of herself in Millie.

“It is something that I do deal with: anxiety, existential dread, worry about the future, focusing on past mistakes a bit too much,” Savill says. “Those are universal feelings that were both specific to me, which I could write about having experienced them, but also I know they’re felt by so many of my friends and family.”

Millie Lies Low was shot in Wellington Central. It will screen at The Embassy Theatre on the 6th of November, Penthouse Cinema & Café on the 8th, and Light House Petone on the 18th as part of the Whānau Mārama: New Zealand International Film Festival. Savill hopes audiences “feel hugged” when it premieres.

“We’re all human and we’re all a bit f****d up, and that’s okay… I hope that the audience can feel seen and heard and go away knowing that they’re not alone.”