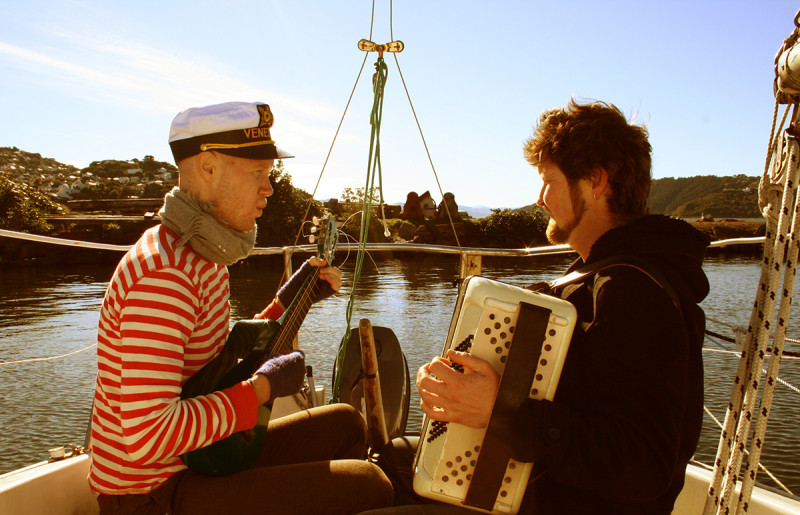 Sail to Breaker Bay Community Hall on the 16th and 17th of April for a salty singalong with the Wellington Sea Shanty Society. Featuring the full four-person squall (aka violins, drums, and the W.S.S.S. core of Vorn Dont le Père Etait Marin on squeeze box and Lake Davineer on git-fiddle) with storyteller extraordinaire Louis Tait, the show intersperses traditional and original sea shanties with tempestuous tales from the one, the only, Moby Dick.

Tait describes a shanty as a simple song that harks to the heave-ho rhythm of work on a ship or port while connecting the listener to the stories of the sea. His favourite is A Drop of Nelson Blood, which tells the alleged story of Admiral Horatio Nelson being pickled in a cask of rum to take back to England.

“On the party’s return Nelson’s former subordinates removed his body and drank the contents of the cask dry, and who among us does not from time to time like to suck the monkey, tap the admiral, or have a little drop of Nelson’s blood”, he asks.

Just as the sea shanty must be bellowed by all, Tait quotes Orson Welles in saying “Moby Dick must be read aloud”.

Of combining the two in An Exploration of Moby Dick Through Shanty, he says he views “Moby Dick and Sea Shanties as literary siblings floating on our consciousness atop a deep reservoir.”

As well as absorbing the deeper meaning he has “waffled on about”, Tait says the audience “can enjoy a night of dancing, singing, and having a great time, in a wonderful venue in a very special part of the world”.