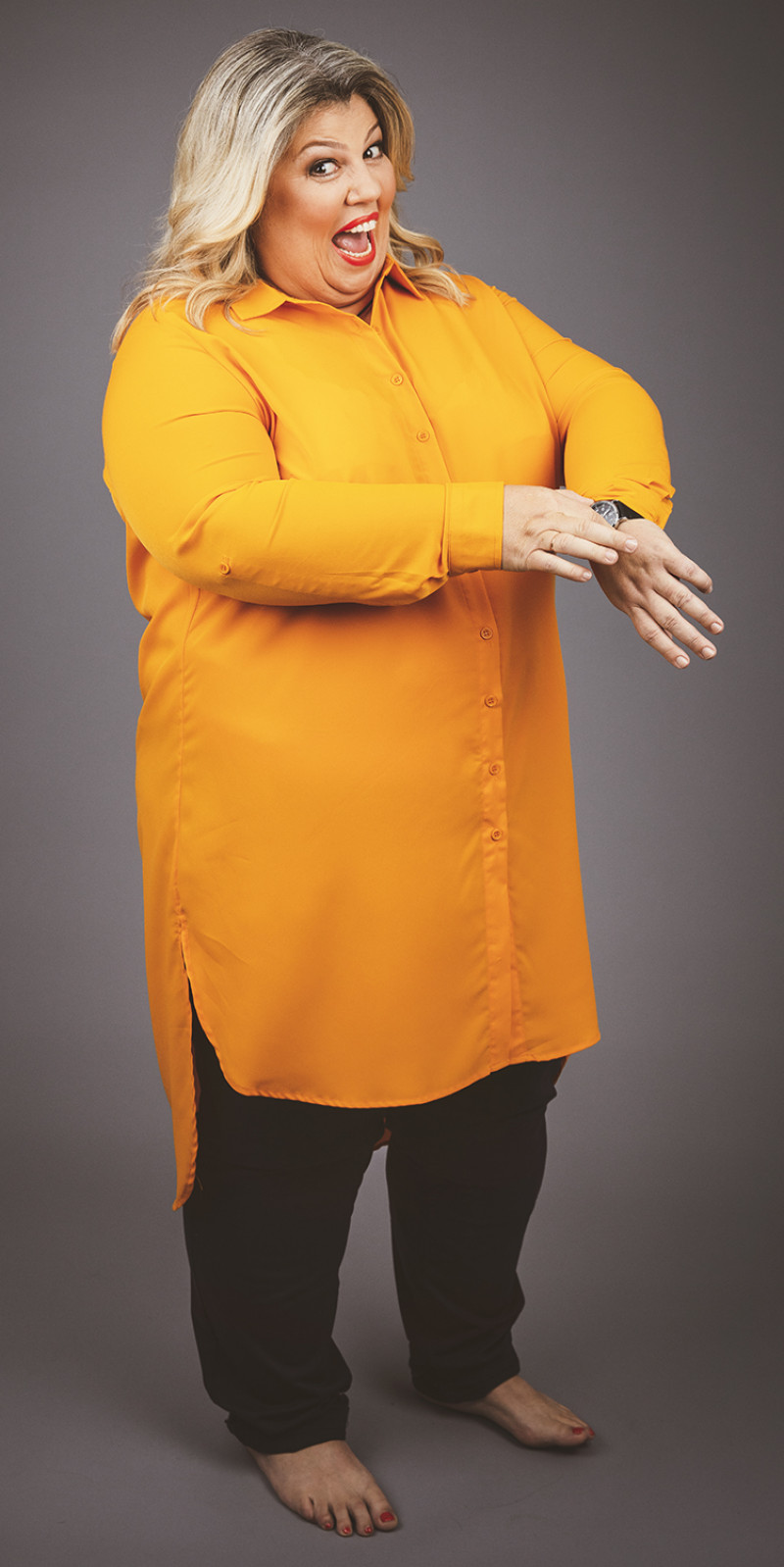 Urzila Carlson is a South African-born New Zealand comedian and actress. She is celebrated for her straight-up stand-up, regular spots on Kiwi TV shows like Have You Been Paying Attention? and 7 Days, Australian stage and screen work, and approachable comedy style that makes her audience feel like they’re just having a drink and a yarn with a good mate.

A Netflix alumna and force to be reckoned with on the international comedy scene – selling a whopping 30,000 tickets across her 2019 24-show Melbourne International Comedy Festival run for example – Carlson is back on our shores for her latest tour It’s Personal. Mind your own business but overshare. Don’t comment on other people’s issues but don’t shut up about your own… It’s Personal is about keeping your cards close to your chest while walking around naked.

We met on Zoom to chat about the new show and more while Carlson was stuck at home with “wild hair” and two kids with COVID, one of whom got cabin fever pretty much immediately. “So, dealing with that”, she laughs, wincing.

Did comedy play a role in your upbringing?

Not traditional comedy, but I’m from a very funny family. My uncle’s very funny, my brother is like the funniest guy I know. I guess in that sense it started early. We never had a TV growing up, so we would sit around telling stories to each other. I remember on a Sunday Mum would put a blanket down in the front yard under a tree or in the shade and she would read us books. We were always laughing. Once, my uncle drove us all the way to boarding school with swim goggles on and this weird hat-helmet-type scenario. It was so insane but he did it because we were so nervous to go to boarding school, just to make us laugh.

You’ve had some stellar career highs so far, like filming your Netflix special Overqualified Loser in Canada for a start. What are some moments that make you pinch yourself?

I just recorded another special now, but every time I walk out onstage and there’s an audience there, I’m blown away. I did It’s Personal at the ICC in Sydney, which holds 6000 people. I sold it out and when I walked out, I nearly burst into tears. Seeing all those people, hearing them cheer, it hits you like a wave. It doesn’t need to be a big show. People coming out to see me, when they’re stoked to be there, it’s a magical night. My whole experience since I started doing comedy in 2008 has all been a pinch me moment. I’m very lucky to do what I do.

How does that buzz of performing on stage compare to the work that you do on TV?

It’s a different beast. Live, you go out, the audience is right there, you get immediate feedback. If something isn’t working, you can tweak it. You have complete control, but there’s safety in television. You can re-do a line or the whole lot. On stage if you stuff up, you can never have that moment back. But it’s magical, it keeps you on your toes the whole time. I guess the big difference is, if you’re on a plane [to go skydiving], the person jumping out of it, that’s live comedy. The person flying the plane, that’s television comedy. For the record, I’m never jumping out of a plane.

I’ve only done it twice.

I’d 100 percent choose jumping out of a plane. I think what you do is crazy incredible.

See I would rather talk to 10,000 people for two hours than walk around the block.

I love it. Let’s talk about It’s Personal. What inspired you to write the show?

During lockdowns – because I spent 10 weeks in quarantine – I looked at people’s Facebook, and particularly TikTok, and every TikTok is like, story time! It’s the most personal stuff, they overshare everything, but then go, ‘This is the backlash that I got’. You can’t – it’s like, flopping your tits out at a market and expecting no one to say anything. And then I got to thinking, I never post anything personal online. Not my kids, not my family, not even my car. Because it’s personal. And then I thought, I’m going to write a show that’s basically like one of these Facebook posts. Just flop everything out. I also wanted to talk about how we got where we are. Our approach to lockdown and COVID has been completely different [from other places in the world], but we’re all basically at the same level now. We’re all just happy to be on this side of it.

What’s it like being out the other side as a comedian?

I’m so happy. During COVID I had so many people sliding into my DMs trying to chat to me, and I realised it was because they wanted to have a laugh. So I started making these little clips, these lockumentaries – every day I’d post a funny video for my audience. I missed them so much. As soon as we could I immediately started touring. Usually after a show I would go out and have a selfie, thank people for coming, which would sometimes take me longer than the actual show. But I wanted them to know that I appreciated it – it’s a big deal, people choosing to spend their money on you. I can’t do that anymore because of COVID. I miss that part, although my tour manager doesn’t, because he’d have to be the bodyguard and the photographer [laughs].

It's Personal comes to The Opera House on the 12th of November. What memories do you have of performing in Wellington?

I love Wellington, I love taking the piss out of it. The last show of Token African that I did was in Wellington, and I relistened to a recording and just loved it. The people are so laid-back and so creative. I usually prefer to start my tour there, because if I’m going to get a fair representation of how the show is going to go, Wellington will give me the truth. It’s like gigging at your mum’s house – they’re a smart audience, but they won’t let me get away with sh*t.

How do you think It’s Personal stands out from your back catalogue?

Every year I think, that’s it, I’ve got nothing else to say. And then I find humour in something else. This one is different because it is personal, I am sharing personal stuff, which I never do. It’s been so fun, doing this show and seeing people’s reactions to it. It feels like I’m just having a chat with a friend in a bar, and we’re both really funny.