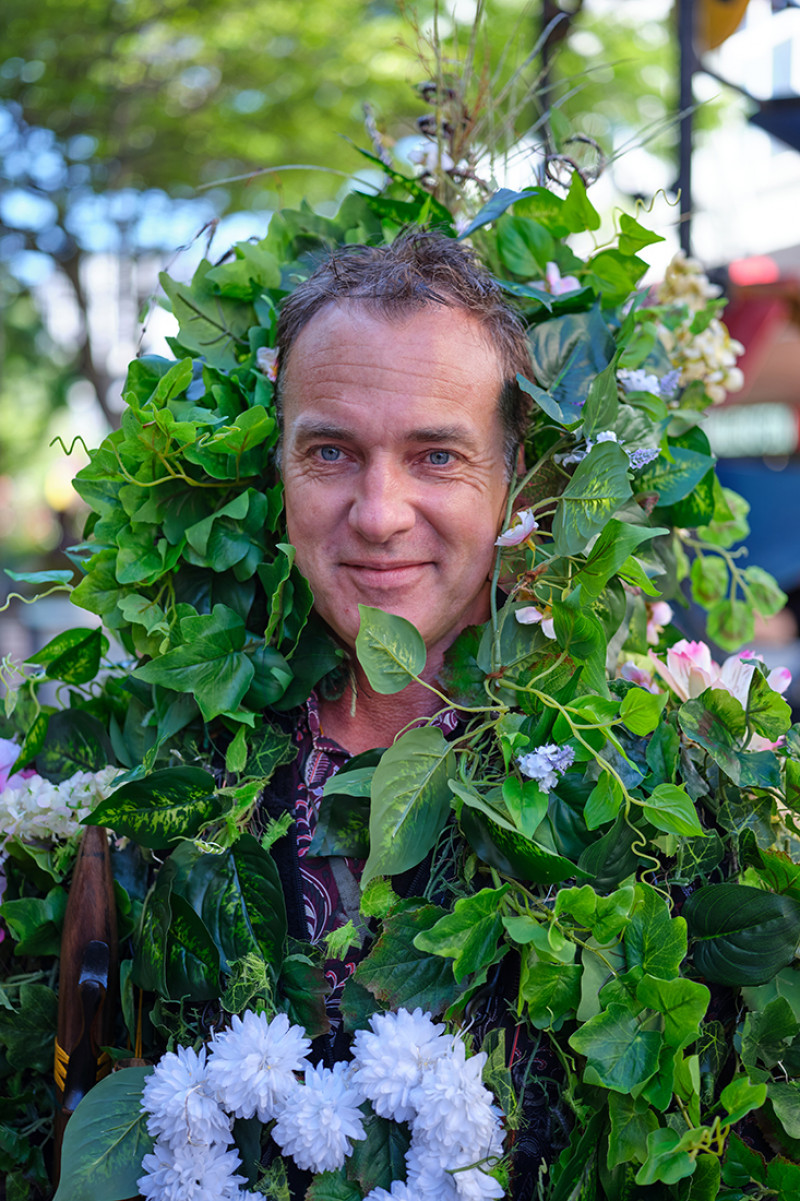 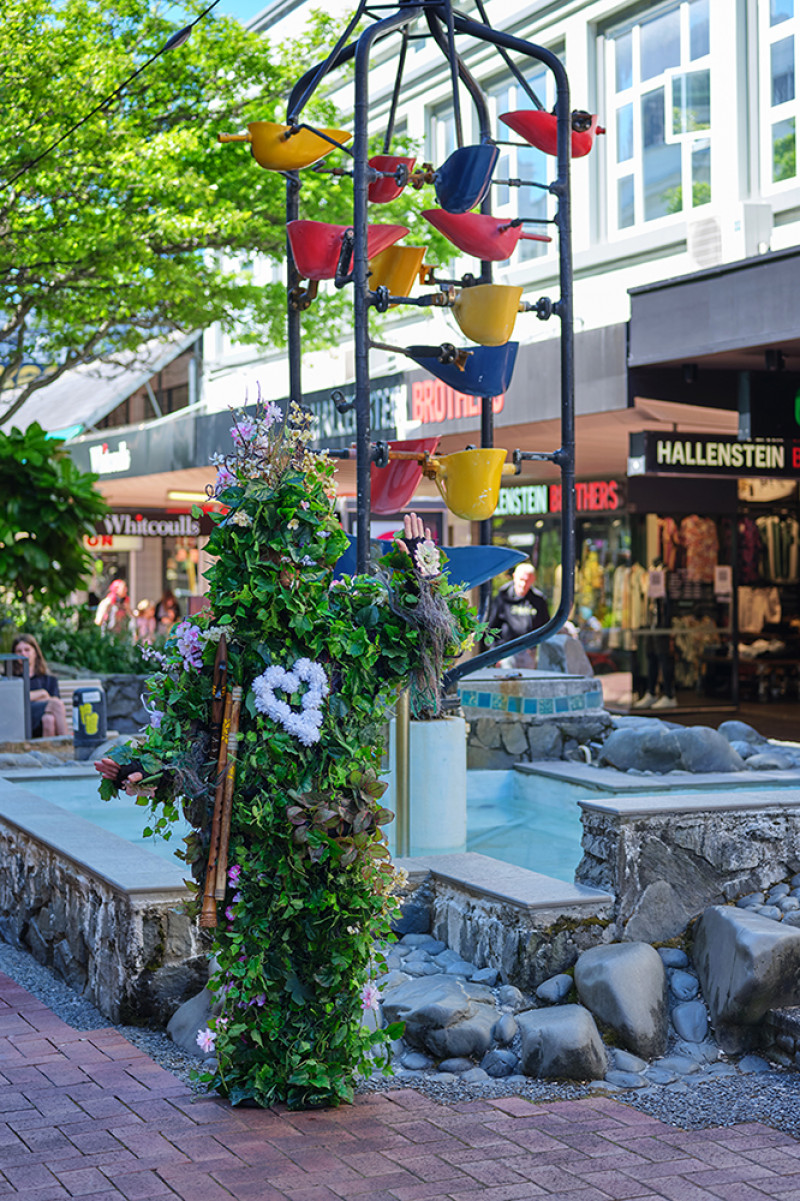 Why do you dress up like a tree and play flute around the streets of Wellington?

I’m held back from COVID, I’m a professional luxury hotel and event artist. I was doing performances outside at night in nature at Te Papa, but you can only do that when the weather is good. I wanted a poor weather alternative to do street performance. I saw these guys on YouTube in tree suits scaring people in the UK, and I noticed people had a really strong reaction to it. So I thought, if I combine that with music, people will have a happy experience, and a bit of astonishment and a bit of visual art as well. The short answer is just to make people smile, because times are a bit different now too.

Your character has the personality of a tree – for example, when you come to a road you might act frightened because trees don’t typically cross roads. How have you developed the character?

Lots of clowning videos on YouTube, there’s one very out-there clown called Karcocha Mimo from Chile. He does quite outrageous things with people. I’ve tried to incorporate a bit of that style of performance, but interact with people within their comfort zone. People in New Zealand are personal-space conscious, so you have to let them come up to you. I made a list of things that worked and things that didn’t and started developing the character into something that’s enjoyable for everybody.

How do people normally respond when they see you?

90 percent smiles and happiness. 10 percent ‘What is going to happen next?’

What are some of your favourite reactions?

When people come right in front of me and [looks around confusedly]. They hear the flute but they can’t tell where it’s coming from!

Do you camouflage often or play out in the open?

I do both, sometimes I stand in front of a tree or under a tree so I look like I’m part of the garden. But the way I designed the tree, if you look directly at it, it looks a bit alien. You can sort of see it’s not really a tree. But from your peripheral vision, like with those tree guys scaring people in the YouTube videos, your brain will fill in the dots and tell you that’s a tree because it’s green and it’s still. When it moves, your instincts are shattered.

Do you counter that fear by playing such peaceful, tranquil music?

You have been a full-time saxophonist, flautist, and DJ for 36 years. Tell me more about the man behind the tree. Who is Jarrod Wood?

I’m no one special at all, just a musician. I’ve been a full-time musician since 1985 when I was in the [Royal New Zealand] Navy Band, and I went to study jazz in Wellington in 92. I spent the 90s performing in cafés and teaching in secondary schools as an itinerant music teacher.

I heard Indian flute in a movie at a film festival here and fell in love with the sound. I had one sent to New Zealand, I practised for two years, and then I applied to a very famous teacher called Pandit Hariprasad Chaurasia in Mumbai, he’s a household name of Indian music. He accepted me as a student. I’ve sat with him for 14 years. He taught me to forget everything and just concentrate on your intention for that one sound. How do you want to make people feel? Why are you playing that music?

Where else have you travelled around the world with your music?

I’m a rubbish traveller, in India I travelled only to the cities I did performances in. The only other country I’ve travelled to is Nepal. I’ve never seen more live music than I have in Kathmandu City.

What about street performance – did you see a lot there?

I saw a drunk Russian girl on the street every night strumming her guitar and singing Russian songs and getting progressively drunker. She would make enough money to pay for her hotel room and all her food for the day because Nepalis are so generous.

I saw two European guys in India trying to travel India by bicycle and pay for it by busking, and failing. They played for five hours and got 10 rupees, which is about 50 cents.

How does New Zealand compare?

Very generous and very sweet. It’s that intention you are playing music for. I can see it in the face of the person stopping for me, the face that says, ‘I love what you did and this is how much I can help you’.

Making money must be the secondary thing. Doing something amazing must be the primary thing if you want to be a street performer. I’m here as an artist to perform, because I can’t perform back at my work in Asia at the moment. I practise four hours a day – people should benefit from that sound. Donations that people give are kind, but if they don’t, I tell them I am just here to make them feel nice. Because that is love.