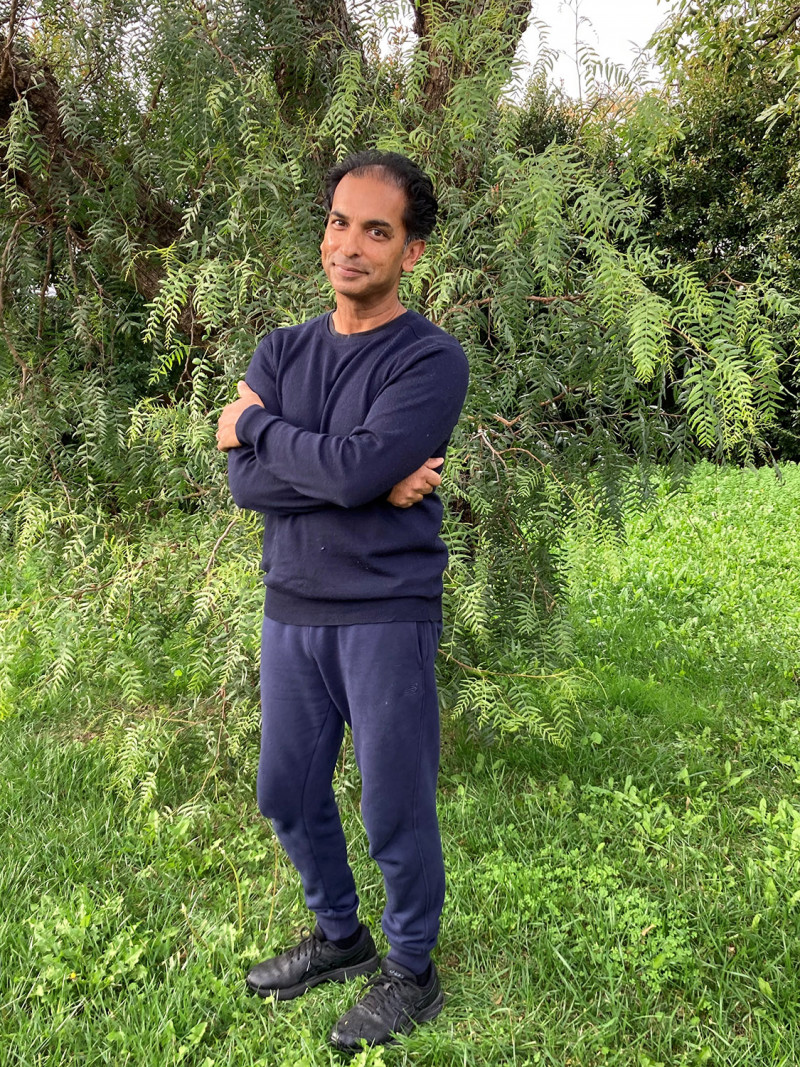 Jacob Rajan on puppetry and pathos by Madelaine Empson

Jacob Rajan is a founding partner of one of New Zealand’s most successful theatrical exports, the Indian Ink Theatre Company, known for Krishnan’s Dairy, Guru of Chai, The Elephant Thief, and more. The multi-award-winning company produces heightened theatrical works that blend mask, puppetry, pathos, and humour to tell great stories around the world.

A prolific actor and playwright, Rajan became the first Indian graduate of Toi Whakaari: NZ Drama School in 1994, co-founded Indian Ink with Justin Lewis in 1997, received the prestigious Arts Foundation Laureate in 2002, and was made a Member of the NZ Order of Merit in 2013. Despite these achievements, his path to theatre was a winding one. We caught up to talk about the journey and Indian Ink’s latest work, Paradise or the Impermanence of Ice Cream, which brings the real-life mystery of India’s vanishing vultures to Te Auaha’s Tapere Nui Theatre until the 5th of June.

Tell me about your childhood, particularly when theatre started to pique your interest.

I was a painfully shy child. Also, I’m the son of Indian immigrant parents, so I was supposed to be a doctor. That was written. There have been doctors in my family going back hundreds of years. Honestly, I never knew there was an arts option.

Does that have something to do with the degree in microbiology and the primary school teaching diploma you earned but never used? How did you come to study at Toi Whakaari?

I was always channelled towards science so did a Bachelor of Science and Microbiology. But no, I never used that. Even when I graduated with my C- degree, I was a very bad science student. While I was at university down in Otago, my compass was pointing me towards the arts. I was sneaking off to film club and watching university student productions at Allen Hall. Still not as a participant, just a voyeur.

Funnily when I left Otago and came back to Wellington, it was like I’d been in a deprivation tank, a creative deprivation tank, and I just kind of exploded into taking piano lessons, to joining the drama club, to getting painting lessons. It was just this furious creative year, by which stage my parents were very worried [chuckles]. I trotted off to teachers’ college to appease their worry and did a primary school teacher’s diploma. Within that time, I was starting to gravitate towards theatre in education. I was performing plays for children and that was finally feeling like something I could do. My tutor at the time, Ralph McAllister, said there’s this guy, John Bolton, who does a mask workshop up in Auckland. I was in Wellington and I hitchhiked – back in the day when that was a thing – to Auckland, did this two-week mask workshop, and that was the turning point. When I put a mask on, I disappeared, the shy kid just disappeared. I thought, ‘that’s really my mission now. I want to do mask work.’

Long story short, I ended up at Toi Whakaari, the New Zealand Drama School in Wellington. I was waiting for the mask component to come up in the two-year course, and it never did. In your final year, you do this thing that was called the monologue, I think people call it the solo now. Basically, it’s you on stage for 20 minutes of self-devised theatre. I chose to use mask in that. That was the genesis of my first play, Krishnan’s Dairy. I use mask to portray a dairy owner and his wife, and the legendary characters of Shah Jahan and Mumtaz Mahal. Shah Jahan is responsible for the building of the Taj Mahal. Weaving those two stories became Krishnan’s Dairy.

When I left drama school, my tutors encouraged me to extend it to a full-length play from 20 minutes. I struggled to find a director that knew anything about mask, but then I met Justin Lewis, my partner in crime. Justin actually trained with John Bolton in Melbourne at the John Bolton Theatre School. It was a sort of planetary alignment. In 1997 we launched Krishnan’s Dairy at BATS Theatre and the Indian Ink Theatre Company. We’ve been creating original theatre ever since.

When you co-founded Indian Ink, what were the guiding principles of the company and have they changed since you first set out?

The problem was that Justin lived in Auckland and I lived in Wellington. One of the guiding principles of how we work was defined by that geographical impediment in that we couldn’t spend that much time together. It takes about two years to put a show together, and that’s not continuous. We spend intense periods of time together and then let it settle, and then come back to it. That principle of time, and letting your subconscious work on it, has yielded shows which have been able to be in repertoire so that they come back again and again. Krishnan’s was meant to be performed last year, which would make it 22 years old now. We craft things that will last, and that takes time.

The other one was mask, of course. We both came from a love of mask and that sort of theatre that’s slightly larger than life. If you think of a mask as an amplification of the face, it amplifies everything. It amplifies your voice and your body and I think in a weird way it amplifies the Truth. It gives you a sort of poetic Truth, Truth with a capital T rather than truth of realism. That is, I think, where theatre works best. Realism works great on film and television, but theatre needs to reach a big audience, the back of a 400-seat theatre. You need something that will take people imaginatively somewhere else. Mask, puppetry, those kinds of things do that. They bring back the childhood delight and imagination. And that’s where we live, that’s what we like to do.

The third pillar is comedy. We use humour. We call that philosophy the serious laugh, a sort of Trojan Horse where you open the audience’s mouth with laughter in order to slip something serious in.

In terms of the serious laugh – have you witnessed a time when your work has shifted someone’s perspective?

Justin and I are a good match in that I love cheap theatrical gags and Justin’s taste is more serious. I never thought of our work as political, but of course it is. If you are the first Indian graduate of a drama school and you’re creating original work, that’s inherently political. As a community, we are often quite silent. We’re in the background doing important things in society, but not making a big deal about it. So to see your own community represented on stage, your own stories, is kind of a big deal. Krishnan’s Dairy had that effect. It wasn’t intentional on my part – still my allegiance lies with telling a good story, and my cultural background is just who I am and that’s what happens – but it does have that effect. I’ve had Indian graduates from drama school or all around the place say, ‘I was inspired to take that step, to follow my passion and go into [theatre] because of seeing Krishnan’s Dairy, or The Pickle King, or The Candlestickmaker’.

In Paradise or the Impermanence of Ice Cream, you are playing seven characters. As the playwright and the actor, do you prefer to take on multiple roles and characters in your work?

I love it. While I love acting with other actors, I kind of equate it to juggling. It’s actually a little bit easier to juggle by yourself because as opposed to juggling with other people, when you drop the ball by yourself, you can pick it up and then carry on. There’s almost a kind of trance-like or meditative state that I can get in with solo work where I really become all of these characters. The mask is my training, a conduit to allow me to channel the characters, to channel all these different beings. I often say that because we take two years to write a show, by the time you go to put it on, it’s not about getting into character. It’s the character that’s screaming to get out of you. You’ve been living with them for so long that you really understand them.