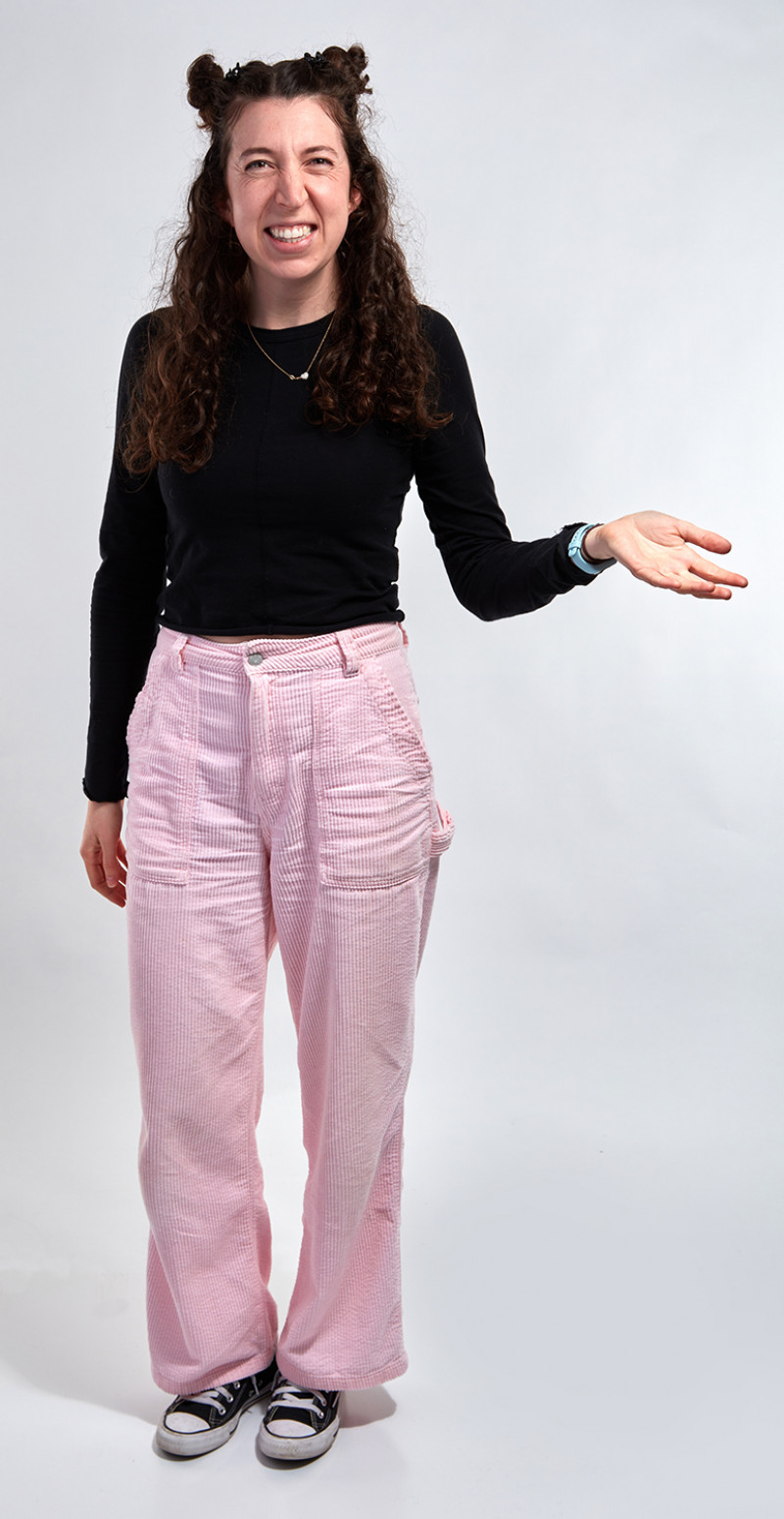 Gabby Anderson on the gift of comedy by Madelaine Empson

Local comedian and improvisor Gabby Anderson had only done a handful of stand-up gigs when she entered the Raw Comedy Quest in 2018. Not only did she win the regionals in Wellington, but the nationals in Auckland, too. The experience – which she describes as “quite a whirlwind” – led her onto many more successes in the industry. Not the least of which is her recent nomination for the prestigious 2022 Billy T Award, now in its 25th year. Anderson joins Abby Howells, Jack Ansett, Janaye Henry, and Maria Williams in the running for an honour that has been bestowed on the likes of Rose Matafeo, Taika Waititi, and Jemaine Clement.

Anderson and I caught up to talk about the nomination, which will see her hit the stage for a set in the Billy T Jams and her own show, Bad(ish) Teacher, in the New Zealand International Comedy Festival (NZICF) this May. Bad(ish) Teacher explores the good, the bad, and the ugly time a student ate a glue stick. Just kidding (and stealing her jokes), it’s about the hilarity of the teaching profession, which Anderson juggles as both a comedian and a full-time high school English teacher.

What was your experience of the Raw Comedy Quest?

In 2018 the Wellington Raw finalists were all so strong. Every year Wellington has such a high calibre of comedians. I felt like I was in two finals – for the regionals, they were all so slick and professional. For the Auckland one I was way more nervous – not because it was the nationals but because all my family was coming to support and they’d never seen me do comedy before, because I was so new to it. And everything that I’d written was about them! So it was like, the layers!

How did the jokes go down with your family?

Good. It’s all true. My comedy is all based in stories that have happened. The show I did [at the 2021 NZICF], Cheaper by the Half Dozen, was about my family. I rang up Mum first to give her a warning, ‘Oh by the way, this is in it’. She’d be like, ‘We didn’t do that!’ And I’d say, ‘Mmm but remember, we did do that’, and she’d say, ‘Oh that’s right! We did!’ We went through the whole thing like that. Especially when I write about people I love, I want to make sure it’s all good.

How has your comedy style evolved from your fist gig to now?

I entered stand-up comedy very much by chance. My friend got me along to judge a fake X Factor talent show at a hall of residence. She was like, ‘You’re pretty funny at choir, do you want to be a judge?’ All the jokes at Wellington Youth Choir! Another judge there was George Fowler [Hugo Grrrl], and he said, ‘You were pretty funny, I produce a comedy show called Comedy Show with Good Comedians in it, do you want a spot next month?’ Yeah, I’ll give it a go! That was my first gig and it was so scripted. I didn’t know what to do so just wrote a funny speech.

How it’s evolved since – my process has changed a lot. I’ve got looser – I try to now work with my natural rhythms of how I talk, rather than how I write. I like to leave a little room to have moments with the audience. I lean more into the stuff that I enjoy – physicality, spontaneity. Having done an hour show at a comedy festival changes how you feel about your own abilities – that you can do something like that.

When you say leaving a bit of room for the audience, do you mean encouraging or responding to heckling?

Actually I should take back my words! As an audience member I’m so afraid of audience participation, it’s my worst fear. I go to a gig, sweaty palms! So I minimise audience interaction – it’s more that I might do a funny line or a callback based on how the audience is responding.

How did it feel to be nominated for the Billy T Award?

Really amazing, but I definitely feel like I count myself out… I’ll throw my hat in but won’t expect anything. It was super elevating to feel like I could be doing comedy in Wellington and be recognised in the space. Sometimes you feel a bit removed. Working your job, doing comedy at nighttime, trying to balance everything.

That’s covered in Bad(ish) Teacher? Tell me about the show.

Bad(ish) Teacher is about teaching and school. It’s easy to talk about my job and many people have had some sort of experience with schooling, so they can relate and connect. I know that teachers will like it, because it’s like therapy [laughs]. Bad teacher… hopefully my boss doesn’t take the title too seriously.

You’re not a bad teacher then!

I try really hard not to be! We all make mistakes, but it’s more of an ironic title [laughs].

How do you balance two such different professions? Or are they not that different?

Teaching and comedy… My mum said, ‘Gabby every day you’re standing up in front of teenagers, a really tough audience, and trying to make education accessible to them, trying to engage them and make them feel good.’ That’s the core of it, there is more crossover than you think. In terms of balancing, everyone probably has things to balance. It’s just late nights sometimes and an afternoon coffee.

Say last week, I did a fundraiser on Friday, and a show on Sunday, and I’ll be doing Tiny Dog, which is an improv company I started with my really good friends [Lesa Macleod-Whiting, Alayne Dick, Stevie Hancox-Monk, and Charlotte Glucina]. We decided we wanted to do our own thing and pitch a monthly show at BATS. We wanted to make improv that was really collaborative where the onus isn’t on one MC to carry it. I love it, it’s so fun. Sometimes I feel a bit separate in myself: Gabby as an improvisor and Gabby as a comedian. I’m hoping to bring those two together a bit more through this format.

To make you toot your own horn, why do you think you’ve been so successful in comedy so far?

[Cringes.] Okay I can get in the mode! People have told me I bring a fresh energy. I know that people enjoy physicality and my facial expressions – even when I think I’m being neutral with my face apparently I’m not, which gets me into trouble sometimes [laughs]. A big thing perhaps that people like is that the things I say are embedded in truth. I start light but I do like to get into bigger things and I always base it in who I am. I wonder if people feel that when they come to my shows, they get to know me.

Regardless of your success, what is it that you most love about comedy?

I feel so alive on stage. I feel in the moment. Giving people a nice time, I think that’s a gift. When I first got into comedy I was watching this TED Talk and it was about flipping it – it’s not about validating you, it’s about you validating the audience. You holding the audience and saying, ‘Don’t worry, I’ve got you, I’ve got this, we’re going to have a nice time’. That links back to teaching too, ‘I’ve got you, I’ve got this’. That’s why I keep going back. It’s a really special feeling.