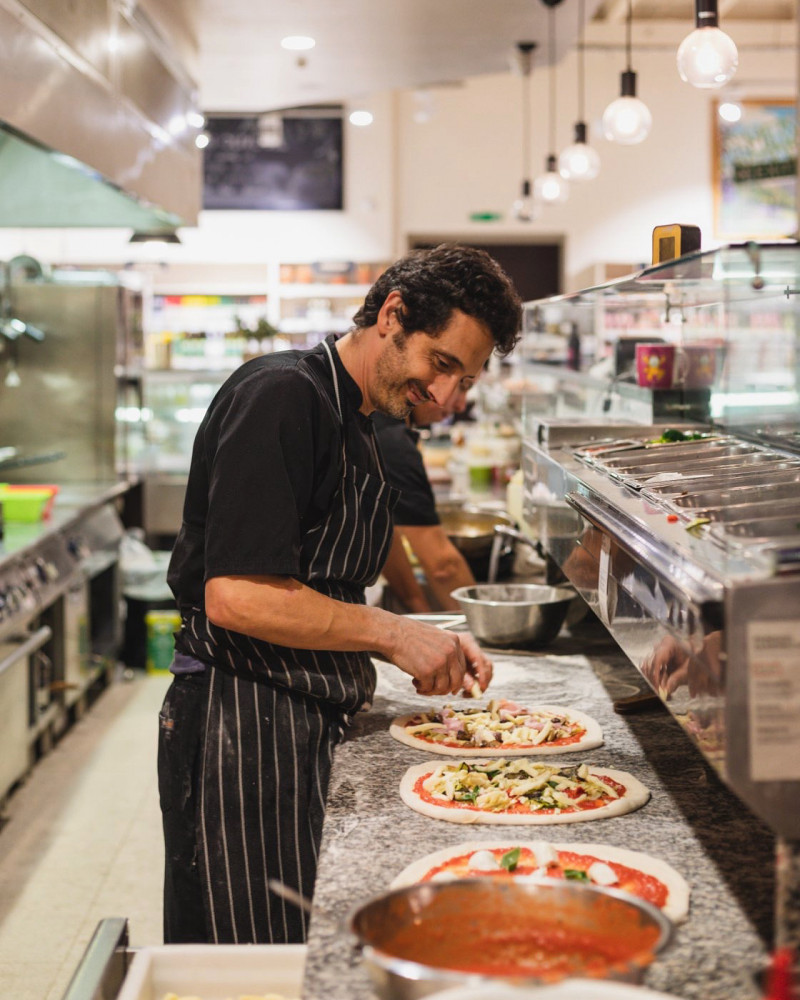 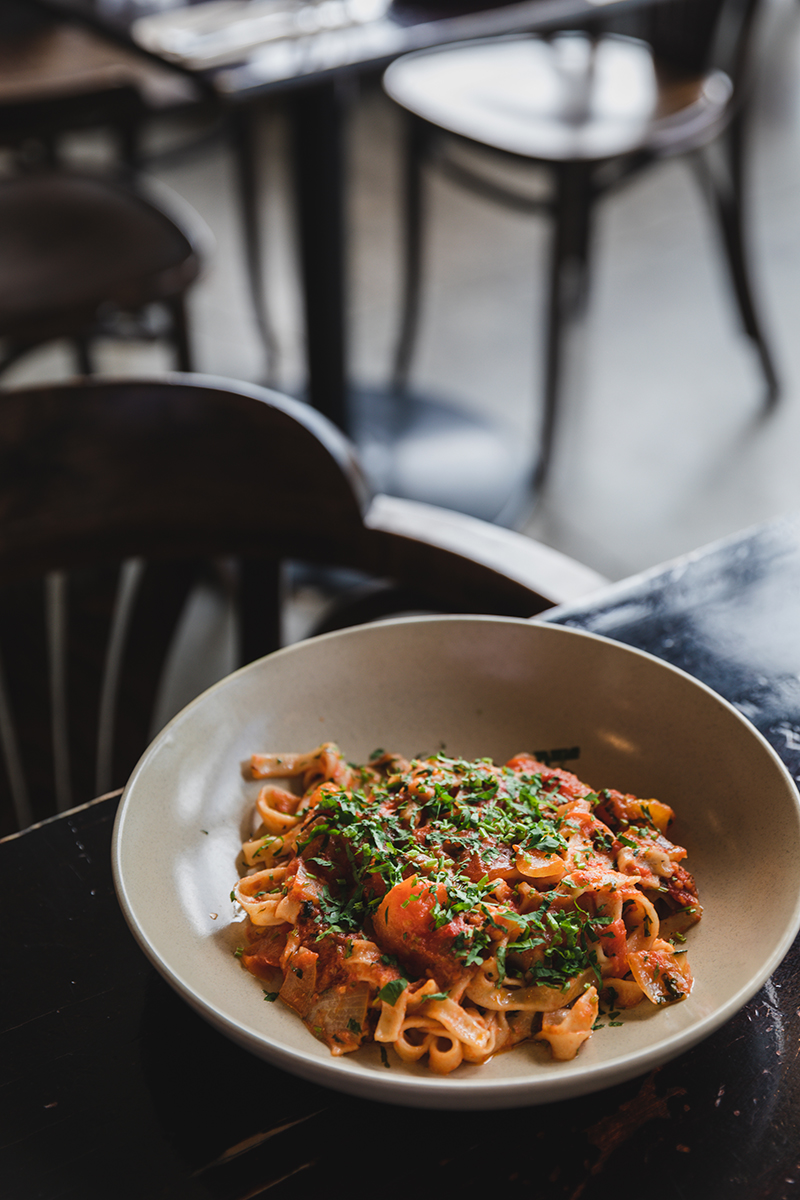 In our Chefs of Wellington series, we talk to the chefs behind some of our favourite local restaurants. Alessia Belsito-Riera chats to Gabriele Cagnetta, the head chef of Mediterranean Foods Trattoria & Deli in Newtown.

Can you tell me about your upbringing and how you developed an interest in food?

I fell into the industry because of my failure in school. It's funny, I did accountancy school and after three years I couldn't bear it anymore so I left. My aunty told me about this local, regional-run cooking school. It was pretty rough but the chef was cool. He was really old school but really interesting and as soon as I started and he saw my keenness in it, he gave me work around town because he knew everybody. And then obviously, food has been around my family because of the love of it, because every occasion in Italy is an occasion to feast and have food. You have Christmas and Easter and we make pasta and lasagna all together and so it was nice to have that parallel. And then my interest in the industry made my passion for food grow very quickly. Italian people have a natural full immersion with food. It’s osmosis.

Where in Italy did you grow up?

Perugia is my hometown which is right in the centre between Rome and Florence, it's a little bit off the beaten track. The Tiber Valley and the sea on the other side. The landscape and geography have a lot to do with the food we grow. We’re really into foraging in Italy – mushrooms, wild asparagus, wild radicchio – it’s part of us.

How did Wellington become your home and why did you choose to work at MediFoods?

I met my wife [who is a Kiwi] in London and then after travelling around we decided to settle down. I came here to visit 25 years ago. I found a job straight away. I knew the owners at MediFoods because they were my suppliers in other places. At one stage they wanted to do something and I did too, I’m always looking for new challenges. I was also looking for more Italian products and the sources here were scarce. When we started, I said I knew what to import because [although] these guys have Italian heritage, they're Kiwi. So with me knowing the products and ingredients, like prosciutto cotto, coppa, bresaola, it proved to be a good idea.

What excites you about cooking?

It's a combination of things. The process, eating itself because I love eating, but also the response of the people that I'm cooking for. I'm really happy if somebody enjoys the food that I cook. It’s really satisfying.

Are the Mediterranean Foods dishes traditional or do you give them a Kiwi twist?

I think it's really hard to [use] the word traditional. Even in Italy if you say this is the traditional amatriciana, carbonara, you might run into trouble. I recently listened to this podcast about D.O.I, designation of invented origin instead of D.O.C [designation of origin]. A lot of ‘traditional’ food is just a marketing stunt. For instance, pizza was a huge marketing stunt for the reverse of the economical and financial situation in Italy after the war. Beforehand, pizza was around but was just street food, the concept of a pizzeria didn't exist. It was a marketing tool to launch the economy of Italy. Immigrants to America started to do the pizza street food over there, they just put some chairs down and [made a pizzeria]. In fact, there are letters from American soldiers writing to their mums and their girlfriends in America saying, ‘Italy is beautiful, but there is nowhere to eat pizza’. This marketing tool is actually named the Pizza Effect. So I like to think that I use traditional techniques and traditional ingredients in order to make a bowl of pasta or something.

I like to think about doing experiments with historical food. Recently, we had a dinner for the Italian food festival, called Il Gattopardo dinner. The Leopard is a big cult movie and book about the history of Risorgimento [the unification of Italy]. There is a scene where everybody [attends] a beautiful party at an aristocratic villa and there is some incredible food. I like to do research and think about that as a traditional food, because tradition in Italy is so mixed up due to all the conquests coming in and out. I like to look at tradition that way: things that have been there and have evolved into other things. And individual versions, in Italy every family does things differently.

What's your favorite dish on the menu at the moment?

My favorite thing is pasta. At the moment we have our pièce de résistance which is pappardelle made by hand with slow-roast pork ragu. It's nice and warm and earthy, and the pappardelle are chunky and rough. Rough and ready, but also yummy.

What makes the new MediFoods pizza oven unique and why does it make the pizzas so delicious?

In Italy now they're changing their idea [of woodfired pizza ovens] for environmental reasons and the regulation that the European community allows for health and safety. The electrical oven made in Italy does the same thing, if not better to be honest, as the woodfire.

And you import flour from Italy for the pizzas as well right?

This flour has been milled and mixed with grain especially for the production of pizza. So it's been more calibrated than other flour for baking. I heard on the news on the radio that there's going to be trouble because something like 30 percent of worldwide flour is produced in the Ukraine warzone, so nations will start to import from Australia, therefore there will be a shortage in New Zealand.

So get your pizzas now before the flour runs out! What inspired you to host wine and food degustations and cooking classes at MediFoods?

To spread the knowledge of our culture and our heritage more than anything else. In Italy, there are something like 600 varieties of grapes and it’s the nation that holds the record; and the same thing with other products like flour, grain, olive oil. There is a really interesting speech by Mr Farinetti, the owner and inventor of Eataly, [discussing] the percentage of flora and fauna Italy’s capable of producing. Italy produces more edible vegetable species than anywhere else in the world. The second place is Brazil and it has less than half as many. So it's mainly for that. I know people love Italy but maybe they don't know in detail what Italy is capable of offering, the heritage and history and the arts. Italy has 70 percent of the world’s artistic heritage. It's crazy. So it’s a reminder for the people that that's why I like to do these things. And also, because I love the combination of Italian wines and the food that we offer.

On that note, as a migrant, is making food from your homeland important to you?

Yes, but it's also nice to know food from other parts of the world to enlarge your mind a little bit. Food has to do with the culture and the people. It's good to not be stuck in one, but to experiment with everything.

Why do you think food is such an integral part of Italian culture and life there?

I think it might be a historical thing. Food is a primary [need]. It’s a primordial thing, I think, and the tastier it is the better it is! And then there is the history as well that food marks. There are traditions in Italy that have a lot to do with Christianity. Whether you believe it or not, it’s important in a society because it can give hope, and I think in a place like Italy hope was a very important thing to have because the poverty took away everything and there was only hope [left].

What makes Italian food so popular?

I think its simplicity and, I don’t know if this counts to a consumer on the other side of the world, but Italians have a lot of respect for the ingredients. My family used to buy like 50 chicks, feed them, grow them free range, and then eventually eat them. So there is a process of having respect for your food because it is going to end up on your plate. That is what I like about the original idea of Italian food. And this is something apart from the fact that the food is simple to understand, to make, and it’s nice and tasty.

What do you think makes Mediterranean Foods Trattoria & Deli unique to other Italian restaurants?

The original philosophy we had when we started this project was to have items on the menu with ingredients that people could taste, identify, and then eventually go around the shop and buy for themselves to experiment with those ingredients at home.