A cornucopia of songs and stories - Regional News | Connecting Wellington 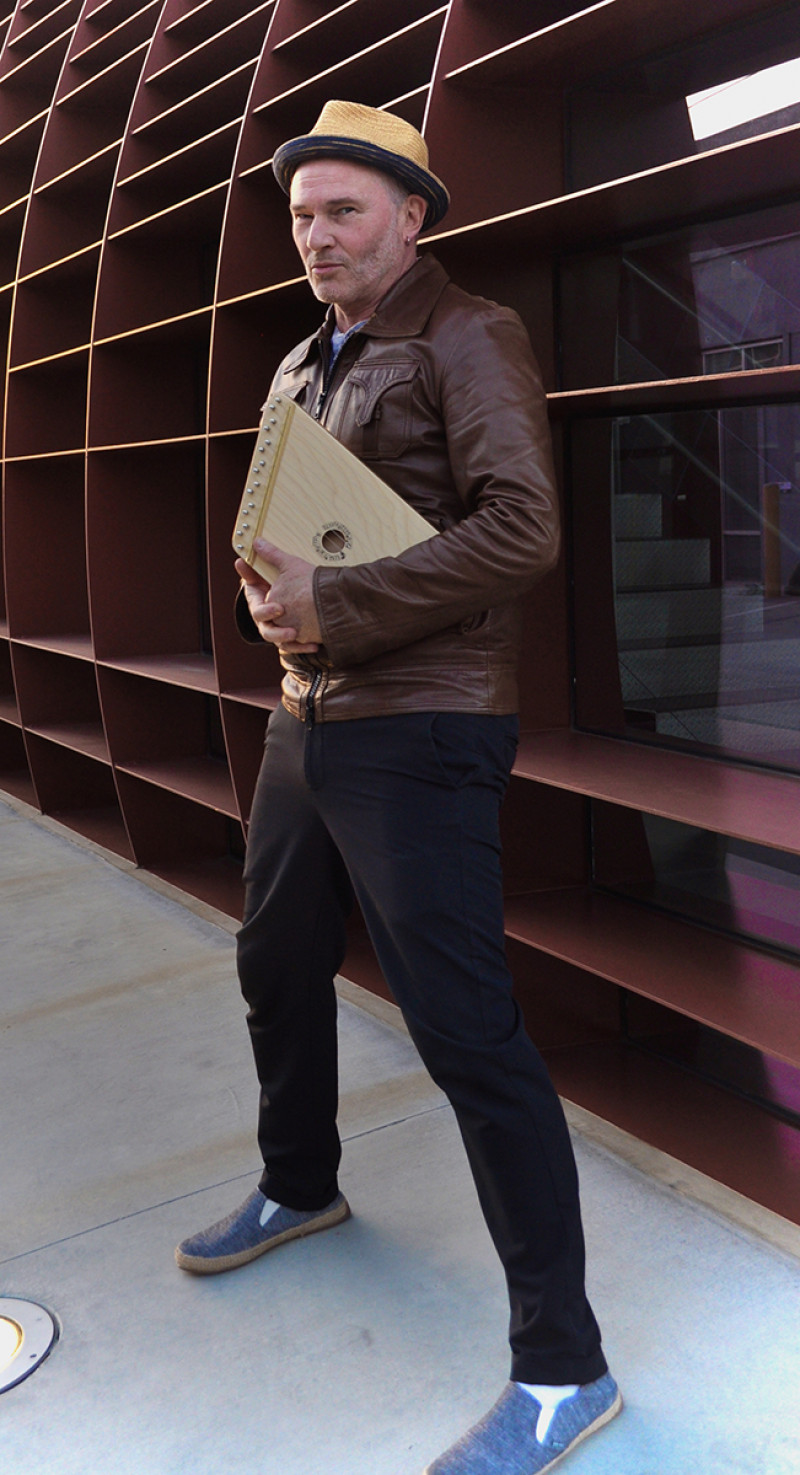 A cornucopia of songs and stories by by Madelaine Empson

Kiwi singer-songwriter Greg Johnson released his first studio album, The Watertable, in 1990. Fast forward three decades through close to 400 songs and the pianist, trumpeter, and guitarist still makes melodic pop music, albeit out of California now. After more than a year of lockdown in LA, Johnson is over the moon to be heading back to New Zealand, where he’ll play Meow on the 2nd of July with his band and latest album Tilt Your Interior in tow.

Also the title of his recently released career-spanning digital boxset, Tilt Your Interior is named after Johnson’s COVID-induced decision to put everything in his tiny Californian apartment on a rug and tilt it 45 degrees, which created interesting angles all over the place and oddly made the space feel bigger.

“Obviously we spent a lot of time sitting around and coming up with stupid ideas”, he laughs, “and that was one of them.”

Having played in bands since the age of 11 or 12, you must have some darn good stories!

Oh boy. Well, every tour I’ve ever been on has a cornucopia of stories, some more intriguing than others. Here’s a classic one for an airport touring story. It was just me and Ted and we were tired because we’d played in London at Bloomsbury Theatre and still had about an eight-hour flight to New York. We were sitting around in JFK Airport waiting for our bags to come out. Ted said, ‘Greg I’ve got your bag for you’. I turned around and said, ‘Ted, that’s not my bag…’ Some other guy had taken my bag and Ted had taken his. You can’t go back through the thing again, so we had to sit outside this little office in the airport for about four or five hours until finally, I just opened the door myself, sneaked into the secure area, and searched for it. I found it and took off!

Did you panic about what was in the bag you’d accidentally procured?

What about crazy moments on or backstage?

Crikey. I’ve seen Marcel march up onstage with his glass of beer to a rousing welcome only to fall straight down a great black hole. Someone should have marked it off, I pass some of the blame onto whoever set that stage up.

What have been some of the highlights and challenges of your life as an artist?

I think a lot of people, probably myself included, start out with this idea that musicians are the big famous people that everybody knows. It’s kind of like how Michael Hill is a really famous jeweller, but there’s probably a hell of a lot of other jewellers, the local ones, who are making more jewellery. That’s just one analogy where there’s a few famous people and everyone else does the bulk of the work. I think that’s true with music.

I’ve always been a nightclub singer, a pub singer really. I’ve learned to have my crowd up close, and I love that. Then of course, the whole recording side of things has been simultaneous with that. Between all of it, if you’re canny – I think you’ve got to have a bit of talent but it’s mostly being canny – you can build a living out of that. You kind of have to win over every person one by one. The old way was you toured seven times in front of them, and by the time they’ve thrown a few beer cans at your head and you’ve thrown a few back, everyone’s quite good friends.

It’s a good life but you’ve got to love the music. That’s the reward. Somehow I’ve managed to pay the rent every single year. I don’t know how. Well, my wife helps quite a bit actually at the moment. I probably make about the same as a pretty average plumber in Johnsonville. It’s an industry where you never know, but that’s kind of the fun of it as well. I like change and I don’t like the idea of consistent money every week, that would just be mind-numbing. I would spend it all in the first week, honestly. I would say ‘I’ve got that coming every week for a year, I can afford that.’ So don’t come to me for economic advice, would be my advice!

Why did you move to California in April 2002?

I landed a record deal here, and part of the deal was you’ve got to move. They helped facilitate all that which was great. For about a year we had this promise, the big carrot was being dangled, we were spending a lot of money, we had Fleetwood Mac’s old driver driving us around. It was great fun. Unfortunately at that point we hadn’t even really made a record yet, we’d recorded four tracks and the bill was already… a lot. In the end we walked away, the label was collapsing, the deal collapsed, everything collapsed. We decided to carry on with the producer we were going to work with. We made Here Comes the Caviar and followed that up with Anyone Can Say Goodbye a couple of years later. My manager and I were doing that basically independently. I became quite accustomed to California. And the coming back and forth, being bicoastal, really appeals to me as well.

What was it like in the USA during… we probably don’t have enough time for Trump so let’s skip to COVID.

It’s been a crazy four years here, five. But things are starting to come back to normal. 2020 was insane. It was pretty horrible. We had a whole year without our little girl being at school, she had online school at home. It was bleak for a while there, the riots. The looting that took place alongside the perfectly legal and orderly and just protests were only a block or two from where we lived. That day, already in the midst of the lockdown, my wife was down there on her bike and said the police were there – it was very frightening was the long and short of it. The cops were harassing the peaceful protestors, and meanwhile the looters were smashing all the shops and taking everything while the cops didn’t do anything.

I was trying to make a record as well. It changed things a little bit, but there were a lot of positives. I ended up making Tilt Your Interior with a bunch of friends and musicians who did their parts from around the world and we piled it all together. I’m very very pleased with it. It’s got an earnesty to it, I think brought on by the years prior.

What chapter of your life would you say the Tilt Your Interior record captures?

The mortality realisation as you hit 50 that you are who you are and you’ve only got so much time to do whatever it is you want to do in this world. 55 is, yeah, getting on now. Maybe if I’m very lucky, there’s another 25-odd years. But that’s not guaranteed either. You’ve got to make the most of it and do your best work.

What are you most proud of when looking over your back catalogue, encapsulated in your new digital boxset?

The boxset idea was essentially every single track I could find from everywhere, because I own the whole lot now, all packed up in full-res where possible: all the albums, the compilations, the singles, a whole lot of demos, unreleased, everything. We put that up on Dropbox and sold people unlimited access. That was the way we raised the money to make this record. I’ve got a pretty hardcore fanbase who turned up for that and a lot of them would have most of that stuff already, but there was rare and unreleased stuff from my whole career, which was fun to go through. That also galvanised the new recording a bit because you see what point you’re at.

There’s probably about a dozen songs in there that I think work really well. Songs like Now the Sun is Out and obviously old Isabelle. But also some of the lesser known stuff, songs from the Anyone Can Say Goodbye album I really like, songs like Venom. Say Hello to the Old Town. The Caviar stuff with Save Yourself and It’s Been So Long. A lot of the rarer songs that weren’t exposed on the radio or TV much are also real favourites, and they’ve become crowd favourites by default from people buying and listening to the records over the years. Songs like Swagger and Handles of Pearl, darker little tunes.

That’s what it is! A box of everything. And the new album is out now at gregjohnsonmusic.com.

How do you think it will feel to finally land in New Zealand for the Time is a Traveller Tour?

I’m really looking forward to just being in an airport and getting going somewhere, that’s going to be great. Quarantine is a little bit of a slap in the face after a year and a half of being stuck inside, but we’re used to it. I know how to hole up in a hotel room as well as any other musician. My daughter will be there to stop too much drinking, and already is quite switched on. ‘Dad, do you really need that?’ [Laughs.] I’m really excited, it’s a great classic band. Meow is getting pretty busy! That’s one of my favourite places to be full stop anyway – so many old friends, such a great part of town, you can get an excellent curry from the place next door, and your hotel’s usually about a block away. It’s just one of those great gigs. I’m looking forward to seeing everyone and breathing all the fresh air, all the usual stuff in windy old Welly.

On that note, does the LA winter even count as cold?

You wouldn’t be the first person to get off the plane in a pair of shorts in January, thinking it’s going to be warm. It actually gets colder than Auckland. It gets down to, regularly, around seven, eight, nine overnight. But then the next morning it will be 20 when the sun’s out. Then in the mountains it snows.

I had a very incorrect image of beaches and sun.

Well, that’s part of it. I miss a good storm, but I don’t mind wearing a t-shirt pretty much 300 days of the year. It just keeps me cheerful.