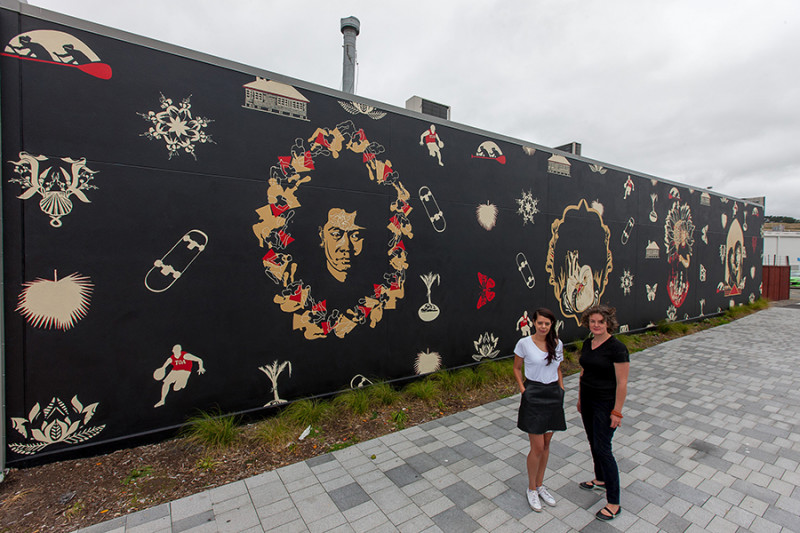 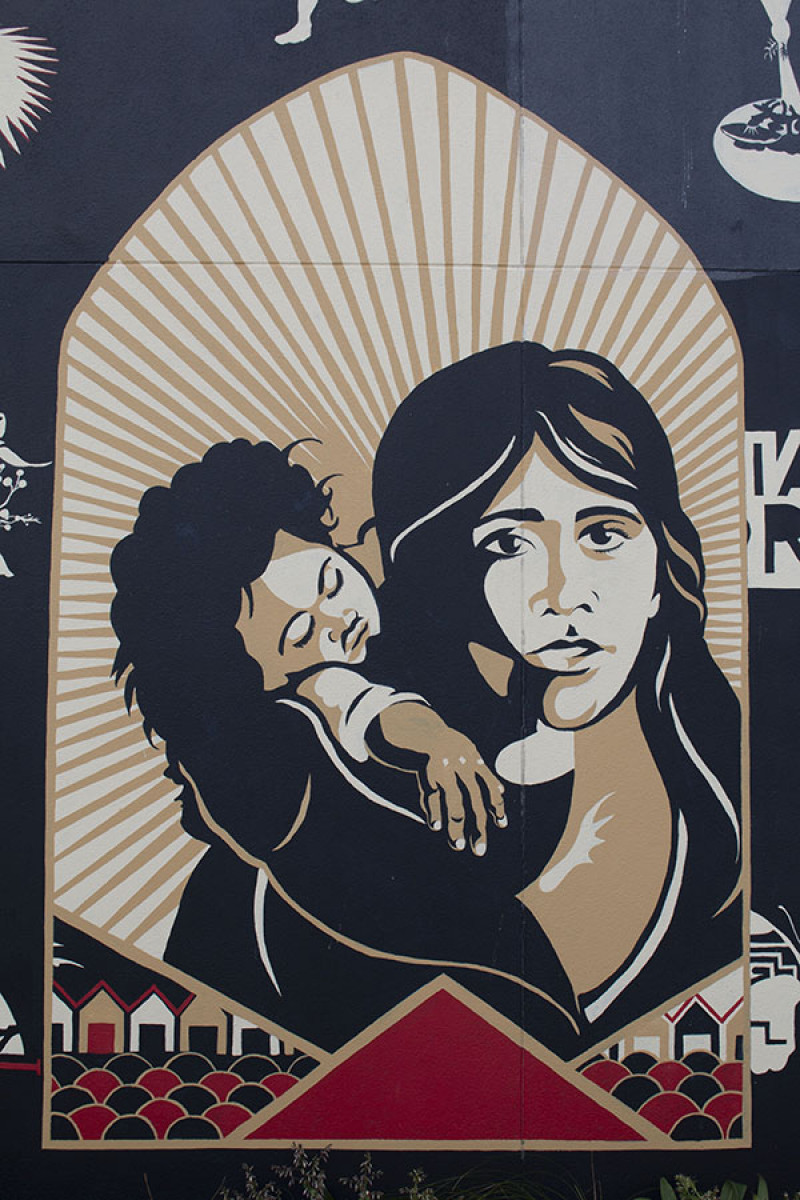 How did you come together to work on the Porirua 50th Anniversary mural?

Gorse: Chloē and I had studied together and created exhibitions as part of a collective we started (The Bite Collective, which is no longer active). I have always been a fan of the sophistication of Chloē’s design sense, especially the sensitivity she brings to Māori design elements.

Chloē: Ruth is a well-established mural artist having done several mural projects in Porirua and Wellington City – without her, I would not have applied to work on such a large-scale project. People don’t always realise it, but community murals are a huge undertaking.

You are clearly very familiar with one another’s work. What was your collaborative process?

G: Our strategy was to create a scheme that broke the design into elements we could design individually. We then used these elements to co-create the final image.

C: While Ruth and I have different styles, we had both come from printmaking. Identifying motifs and applying them in a graphic way, and layering block colours, is very much part of the printmaking process and aesthetic – woodcut printmaking in particular. I love that the mural reflected that aspect of our practice at the time.

So many stories are represented here: the portrait of choreographer Neil Ieremia, a mother and her child, stencils of skateboards and waka. How did you choose what to include?

G: The first stories, such as the mother and child, were crowdsourced on Facebook prior to our involvement. Then we used our community networks to have loads of conversations with the wider community about what people were proud of. The process was really fluid.

Why did you settle on this colour scheme and the patterned style?

G: I hoped the black, red, and white would be a gentle acknowledgement of the local Māori community; it was also a set of colours already being used around the space… We wanted to mark 50 years of Porirua City with a visual language that was typical of the 2000s.

In what capacity did kindergarteners from Papakowhai and Waitangirua inspire segments of the mural?

C: My mum had been an early childhood teacher at Papakowhai Kindergarten for over 10 years. I told her about what we were doing and asked if she would talk to the children about their favourite things to do and see in Porirua – feeding the ducks at Aotea Lagoon, the butterflies commonly seen in summer on a popular walk in Titahi Bay, and watching the waka ama from the shoreside in summer. I think if you are creating something that intends to sit in a community space, you are obliged to widen the conversation to the people that live in it.

G: I had worked with Waitangirua Kindergarden on another project, so I knew the commitment they had to teach gardening and ecology… I used this to create the girl with a watering can. She symbolises, for me, the way reconnecting with nature is essential to the wellbeing of the next generation.