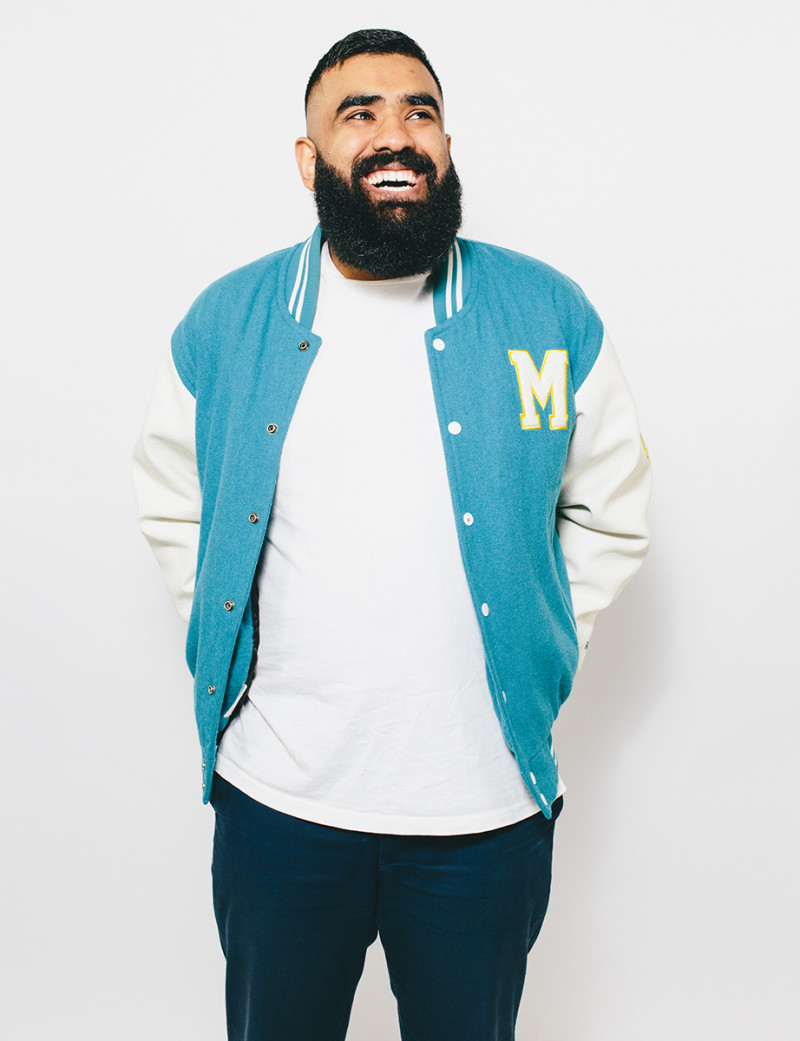 Pax Assadi is a comedic force. One third of sketch trio Frickin Dangerous Bro, a regular face on Three’s panel show 7 Days and TVNZ’s Have You Been Paying Attention, and a guest host of The Project to list but a few stage and screen credits, the comedian, actor, and writer has been bringing audiences joy since he set out into the world of stand-up in 2012.

Onstage, Assadi blends the mundane with the profound, making the everyday funny and social issues accessible. Catch his hectic comedic stylings in person when, after appearing on the bill for three years running, he’ll step up to host the Best Foods Christmas Comedy Gala at The Opera House on the 9th of November.

Do you remember much about your early days in comedy?

I still have all my notebooks from when I was 16 to about 20, which contain all of my first ideas and jokes that I wrote. They’re atrocious. I remember my first gig, the first heat of the Raw Comedy Quest. I crushed it, but that was a very supportive audience. I came out there with my half-baked concepts and my average punchlines and stormed it, I think riding off my charisma but with no skill. I went on to a bigger gig, Big Wednesday, and tanked so hard with the material that had been killing at my first three gigs.

I cried, but for some reason, I realised this is part of the journey. Yes, I didn’t do great, but in a weird, kind of sick way, I enjoyed the pain. I liked the trial-by-fire experience. It was a wake-up call, which was great. You need to get snapped out of the cushy gigs.

When did you find the happy medium between the cushy gigs and the challenging ones?

It took about two years to find real consistency. It’s a gradual evolution where you start to feel comfortable on stage, you start to believe your material, you start to lean into what you’re saying. Half of comedy is confidence and the audience believing you. Once you start writing good material, what separates good comedians from the average ones is when everything comes together – stage presence and the understanding of aura and tone, combined with increased skill in writing.

What do you define as good material?

Now that I’m much deeper in my career I’m really starting to try to push myself into more observational stuff, more social observations of the world around me, more traditional stand-up. That challenges me.

Uh huh, I’m working on my pro-racist stuff at the moment [laughs].

Why do you think comedy is such a good avenue for talking about unfunny things?

I think it’s because laughter brings down walls, laughter breaks natural barriers that people hold up. I used to do a joke all the time about how if you have an ethnic name it’s harder to get a job than if you have a white name. If I said that point blank to an employer, say a white employer, it’s probably hard information to take onboard. They might get defensive. They’re probably thinking, ‘whatever man, I’m not like that’. They’re not actually listening, and a lot of the conversations around social issues are permeated by this defensiveness, even online. But say you’re an employer, when I’m onstage making you laugh, your barrier has come down. The notion that it’s harder to get a job if you have an ethnic name now slips into your mind without you having to think about it. You’re put in a state of joy, laughter as a result of joy, as a symptom of joy. Joy to me is a state of mental clarity, or mental clarity is a symptom of joy. That’s why I think comedy is such a perfect place to talk about these inconsistencies in society. The majority of people are now willing to listen and feel a sense of openness to your message, because you’ve made them laugh.

How have things changed since you first set out on the comedy scene?

The internet has kind of taken over comedy, and if I’m going to be honest it’s something I’m struggling with. It’s tough for me to keep up with the never-satisfied void of social media because yes, I’m relatively young, I’m 29, but I didn’t fall in love with being a social media content creator. I fell in love with being a comedian. That feeling of being in a room laughing simultaneously.

With COVID-19 making live performance so difficult for a time, how did you adapt to life as a comedian?

That’s the period where I kind of made peace with the social media side of comedy, because I had all this pent-up creative energy, I had to put it somewhere. But my wife will attest to this, I think I became a worse person without stand-up. I didn’t realise how much stand-up is responsible for my sense of calm and being a friendly person. It sounds like a drug, like I’m addicted to drugs. I guess all comedians are addicted to the rush to some degree, as righteous as we want to be. I want to stay as righteous as I can possibly be because stand-up without a sense of purpose to me feels empty.

Could you sum up your sense of purpose as a comedian?

To be a source of positive change, but at the same time to be someone who tries to challenge the status quo and challenge commonly held perceptions of the world. The stereotypes that permeate our society. But also I want to be as excellent as I can at my craft, which is making people laugh. The sub-purpose is to continue to be a representative of people who don’t feel like they are represented. That’s just my experience, because I’d never seen anyone who looked like me on TV, and never had my experience on TV. That’s changing, and I’m proud to be a part of that.

What makes you laugh and is it you?

I hate watching myself. My voice, my face, the way I stand, my knees. I can’t stand it.

Yeah I hate my knees. Silly stuff makes me laugh. I love Napoleon Dynamite. It’s so funny because I’m talking about being righteous and trying to use comedy to affect change, but my favourite comedy to consume is just people being goofballs.