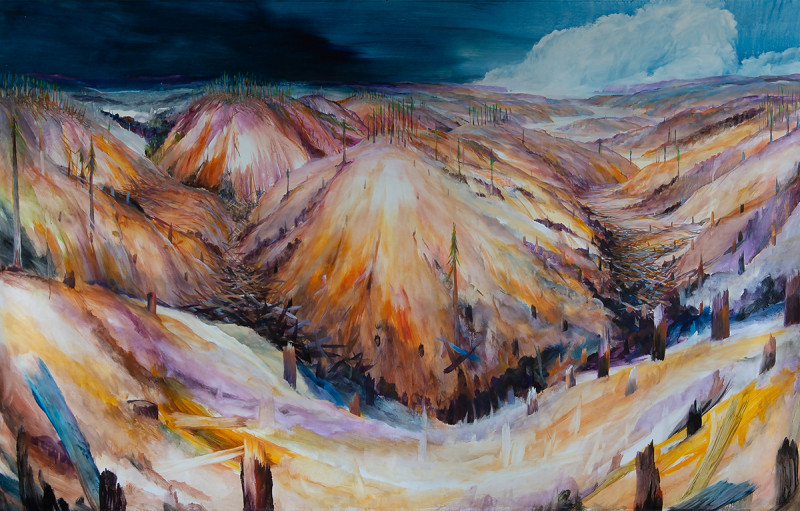 When decisions are made from afar by John Walsh.

Walsh’s new exhibition, which will run at Page Galleries until the 7th of November, depicts the environmental devastation that has shredded his homeland on the east coast of the North Island. Intensive pine forestry has seen Tolaga Bay (Uawa) left barren. These artworks are a plea to the forestry companies, government bodies, and local council to look at the damage caused to the environment and the people, and do something about it.

While he now resides in Wellington, Walsh says “Uawa Tolaga Bay is my home, my mother”.

“My art, landscapes, stories, and sensibility come from roaming these hills, fishing, surfing this coast. All the micro-environments of eels, whitebait, fauna, and flora that we are hardly aware of – which could unlock medicines and industries – all obliterated by this profit-above-all-else pine industry… This is unsustainable, ecological genocide,” he says.

“Don’t see this as normal or right. Think of Tolaga and be sad, angry.”

One of the paintings, My Heart is Broken, contains Walsh’s deeply personal ode to the maltreated whenua. It begins, “My heart is broken. My land, my mother is brutalised. My soul cannot rest.”

The accomplished artist says the subject behind Uawa Tolaga Bay is “urgent and pointed”, which served as motivation for the exhibition.

“My process is pretty fluid and constantly responds to events and issues, but because I was so sad and angry about what has happened in Tolaga Bay, it certainly gave the work more urgency.”