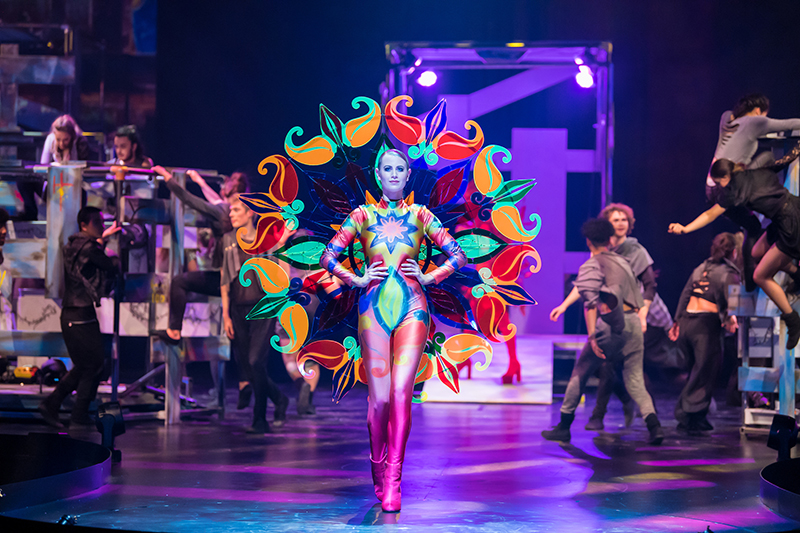 115 finalists from 22 countries were selected for this year’s World of WearableArt Awards show, where their designs were exhibited in a stage spectacular with colossal production values.

WOW is always breathtaking. There’s nothing quite like it in Wellington – nay, the world. If this was my first time, I’d be ranting and raving about how wonderful it was even after the cows came home. Unfortunately, I felt this year’s show was not as cohesive as the four phenomenal productions I’ve seen in the past.

The creative team had a massive job: tying six very different worlds together – Aotearoa, Avant-garde, Open, Mythology, Transform, and White – into one that showcases and celebrates the incredible works at the heart of WOW. A lot of different elements were brought into this show to never return: a little girl who ran out to marvel at her surroundings, two emcees who disappeared into the ether, a real-live ballerina inside a mirrored jewellery box that wasn’t utilised to its full effect. John Strang’s brilliant AV design wove the strongest thread between the worlds for me, with marvellously drawn throwbacks to the show’s recurring motifs of fire, slimy creatures, and eyes. Torches and giant tentacles served to strengthen these references on the ground, while a dazzling scene featuring deep sea divers caused an audible “wow” to escape my lips.

This show featured a large group of dancers who, while clearly talented, weren’t always able to keep up with Sarah Foster-Sproull’s demanding contemporary choreography. It’s the type of choreography that requires such precision, small missteps become glaringly obvious. One hand out of place, one rākau (stick) hitting the floor a split second after the next, one taiaha (close-quarters staff) raised a millimetre higher… these weren’t rare occasions. When working in time, the dancers’ wild energy and camaraderie shone through, highlighting Foster-Sproull’s visionary approach.

The 2019 World of WearableArt Awards show was a jaw-dropping affair, with plenty of moments that stood alone as exceptional.