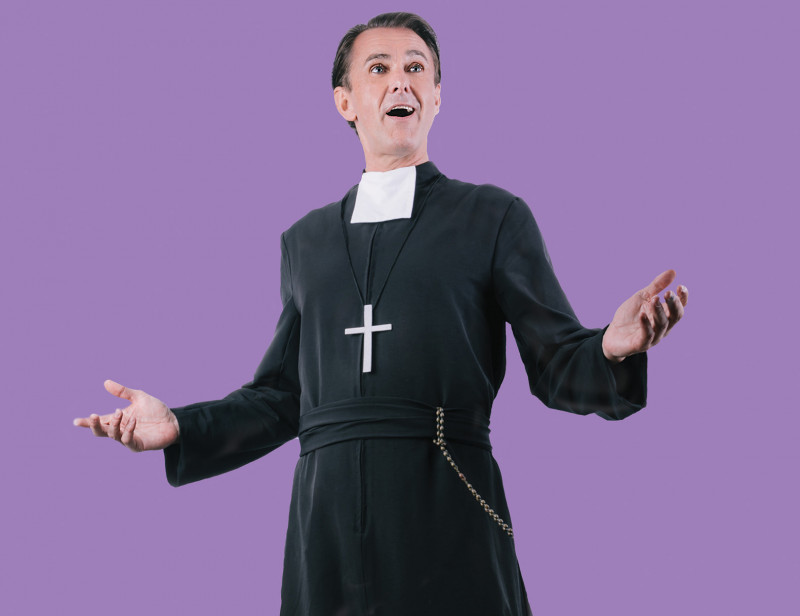 Running at Circa Theatre until 7th Mar 2020

Brother Vianney (Andrew Laing) is a Marist Brother teacher at a boys’ school in Napier, 1959. Over the course of one lesson, audiences (who are positioned as his students) discover how this loving, kind, extravagant man came to be a devout Catholic. We don’t do much schoolwork though! Instead, Brother Vianney treats us to belting renditions of Broadway classics and wistful waltzes, action-packed re-enactments of Hollywood movies, and dewy-eyed glimpses into his past life in showbusiness.

This glorious character is clearly gay, but Dean Parker’s script doesn’t really delve into the conflict between homosexuality and religion. I think a deeper exploration of that would be a sequel – a Wonderful 2.0. What we have here is a palatable (and rather delicious) 80 minutes of madcap entertainment that still packs an emotional punch. It’s a perfect storm of comedy and pathos.

Brother Vianney’s mind moves a mile a minute. Strengthened by Conrad Newport’s exemplary direction, Laing’s natural sense of comedic timing accentuates Parker’s best lines – of which there are countless. It’s a masterful one-man performance, and not just for Laing’s faultless delivery of a jaw-dropping volume of dialogue. It’s his obvious respect and love for the character, shared by the writer and director, that moves us. His escape into the role is so complete that it enables ours.

Inspired by an original design by Bonnie Judkins, Tony Black’s lighting design is the ending’s pièce de résistance, with changes executed at such a gradual pace, the eyes adjust before the lighting state does. This means that, for me at least, Brother Vianney is framed by an angelic halo that serves the script beautifully. In these final moments, Laing’s performance is raw and resonant, electrifying the audience with an emotional charge that continues to crackle after the lights fade out.

As Brother Vianney so delightfully says, “use the word once today and it will be yours for life.” What’s the word for this production? Wonderful!