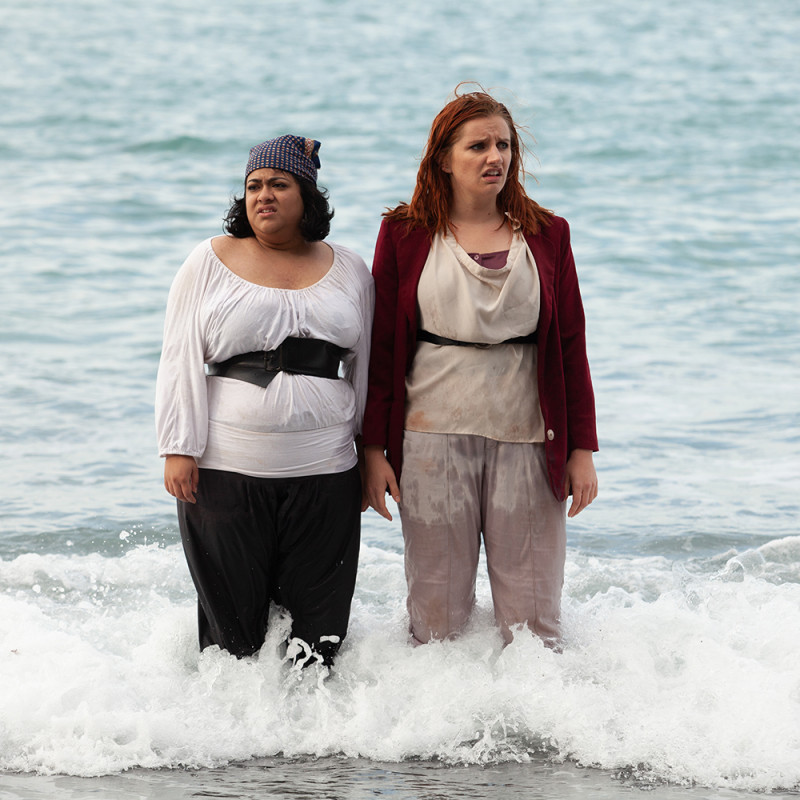 When Booty Calls: The Rebooty

When Booty Calls is a gay action-adventure slapstick rom-com about pirates. How’s that for an opening line? This mile-a-minute production sees Liz (Nina Hogg) and Jen (Phoebe Caldeiro) stranded on a desert island, where they stumble upon the Captain’s (Troy Etherington) booby-trapped treasure. Liz decides to drink some of his prized grog and the two quickly become the subject of his wrath – not to mention his ludicrous, murderous vengeance plots. Cap’s lonely right-hook-man Peggy (Ella Wells) is to assist in the – err, execution of these plans, but turns her coat at the prospect of friendship.

I had high hopes for When Booty Calls: The Rebooty and was stoked to be spending my Friday night watching pirates do stunts and fall in love. I don’t say stunts lightly as the play calls for a fight choreographer (Hogg) and stunt mats, with weapons ranging from swords to fists to silks. The choreography is complex, daring, and well designed, but the execution (I swear I’ll stop with that pun soon) feels under-rehearsed. Because of this, my friend and I agreed that watching the fight scenes and their hiccups was the wrong kind of nerve-wracking, where instead of enjoying the cleverness you’re worried something might actually go pear-shaped.

This Rebooty was originally devised by Hogg, Caldeiro, Etherington, and Tom Atchieson (who previously co-directed), and now has Wells in the credits mix. It has enjoyed sold-out (and sadly cancelled) seasons but I feel it still needs development. Some jokes and plotlines could be left on the cutting room floor. For example, Liz and Jen have a nasty fight and while I understand the need for conflict, it makes me quite dislike both characters – particularly Jen for the mean things she bellows at Liz.

That’s not to say I didn’t have a (cannon) blast. There are lots of great things going on here, like Etherington’s energetic performance, Hogg’s golden comedic timing and audience asides, Caldeiro’s atmospheric compositions, and Scott Maxim’s impressive set and lighting design. If the script could come up to match the high production values, I think we’d have a winner here.