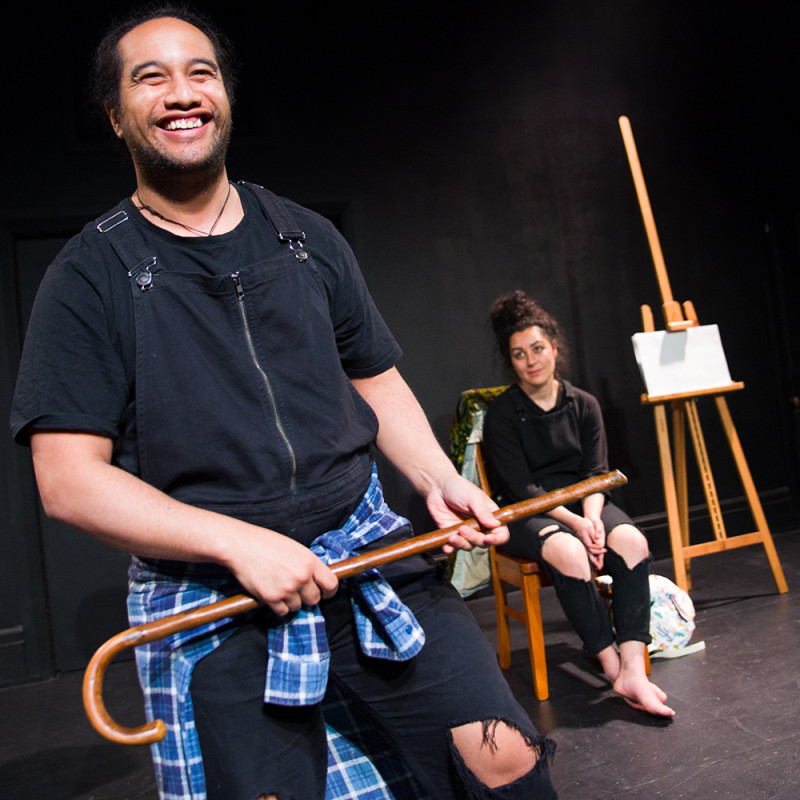 The theme of this uplifting TAHI Festival production is exactly what you’d expect from the title – family. More precisely, “lifting the lid on the complexity of family relationships from disastrous to delicious”.

This aim is achieved through four actors (Emma Katene, Daniel Gagau, Ngahiriwa Rauhina, and Melissa Sutherland) performing 13 short extracts from 11 solo works by New Zealand writers. With the help of assorted chairs, a few bits of wardrobe, and a couple of props, they deliver warm, empathetic, poignant, and often laugh-out-loud vignettes of what it means to have whānau.

The playwrights whose work is showcased here are Vela Manusaute, Felix Desmarais, Rob Mokaraka, Jamie McCaskill, Toa Fraser, John Broughton, Emily Duncan, Tom Scott, Melissa Sutherland (doing admirable double duty as playwright and actor), and Nicola Pauling. Each has their own rich way of shining light on the trials of being human through the lens of family.

The lovingly created characters we meet over the hour of the production range from a miracle baby produced from the remaining half of a fallopian tube after several ectopic pregnancies and miscarriages, to an 11-year-old girl with a superhero Samoan mum, a literal and metaphorical Karen and her daughter, a young man revelling in his half-Māori/half-Pākehā ancestry, a family with projectile-vomiting children heading to the beach, and an angry mum whose kids have been removed by CYFS.

Co-directors Kerryn Palmer and Sally Richards have chosen their extracts carefully and well. In addition to being woven together by theme, the pieces flow seamlessly from one to the next with appropriate music, well-applied projection onto the back wall of the theatre, sensitive lighting, and some cool dance moves from the actors who occasionally interact.

The mark of a successful theatre production is that you’re left wanting more. I could have happily watched this group of talented actors telling their uniquely Kiwi stories with genuine pathos and humour well into the night.