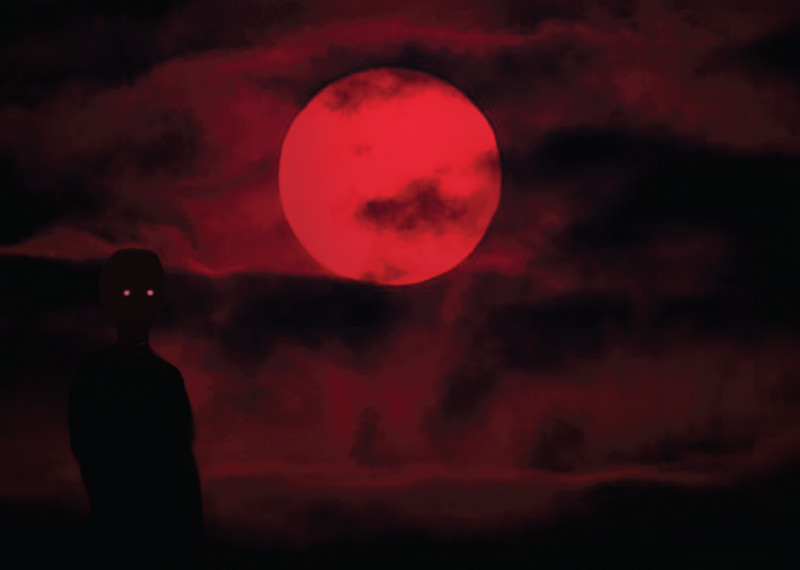 Freya Daly Sadgrove and Karin McCracken have been in a ‘safe space’ for some time. Joel Baxendale shows up late with a big bag of onions. His tardiness might ruin things for the group, which now includes the audience. We don’t know much about the situation except that the outside world is bad. No one can leave, and we must be seated come nightfall.

With the audience seated in a large circle, interaction is a key component of Werewolf. Some members rise to the challenge, with one particularly hilarious spectator yelling at Joel to “follow the rules” and “get in the cupboard” at increasing intervals. We are given cards to explain our ‘roles’ in the community, but only a handful of us are called upon. As a community support officer, I am on edge waiting for a task that doesn’t come.

Together, the highly effective sound design (Oliver Devlin) and lighting design (Marcus McShane) cause collective anxiety – especially at night – and build to a nerve-wracking climax filled with disturbing tableaux. The ending itself is a little confused, with standing audience members unsure of where to go as the actors make an unassuming exit. It’s not quite the right note of chaos to go out on but has all the markings of an unforgettable conclusion.

Inverlochy Art School is said to be haunted, a fact underutilised in this performance. I was expecting a Fear Factory haunted house experience, where werewolves jump out of all the nooks and crannies and padlocked rooms yield up their secrets. While I’m glad this wasn’t the case, the unnerving energy of the space only contributed marginally to my experience of Werewolf, which I feel could have been performed anywhere.

Werewolf: Development Season is a clever commentary on mob mentality and fearmongering; how quickly humans can turn into monsters. I enjoyed being part of the innovative experiment and applaud the risks taken. I can’t wait to see where to next.