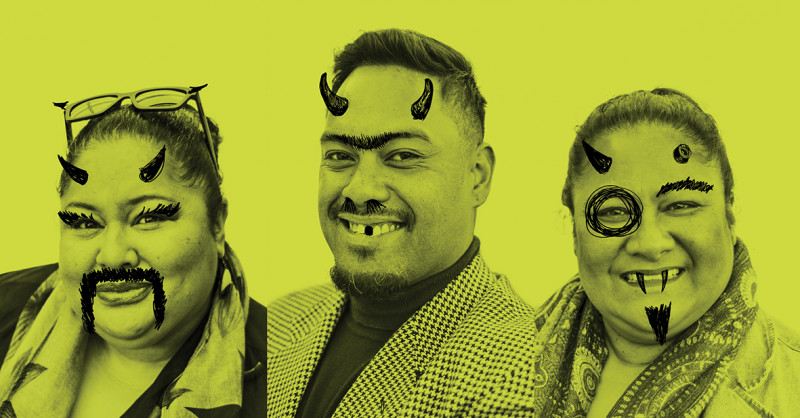 Three unpleasant people find themselves locked in a room together. Reverend Stella (Goretti Chadwick), academic Lina (Anapela Polata’ivao), and politician Garth (Mario Faumui) each operate under the guise of benevolence, pretending to serve others while only looking out for number one. In Uma Lava, all three of them pay for it.

The first thing I’d like to say about Uma Lava is that I should have stood up at the end of it. I think my legs had turned to lead from shock, my brain too busy trying to process the depraved hour I’d just witnessed (read: screamed through). I’ve never seen anything more outrageous, crass, or disgusting. At the same time, I don’t think I’ve ever seen anything more real, raw, or bold. In the programme notes, Victor Rodger says writing Uma Lava was the most fun he’s ever had in his life. After watching it, I could say the same.

Now that the gushing is (nearly) over, let’s get down to the nitty gritty. I can’t spoil the overall premise of the show, but the room it all takes place in is superbly designed (Sean Coyle), with Jennifer Lal’s dramatic lighting scheme raising the stakes. Filth and muck pervade the space – so much so, I swear I could smell one scene. However, that’s partly a credit to Polata’ivao and her fearless embrace of such a nauseating character.

Chadwick is totally transformed from her role in Still Life With Chickens, delivering flawless comedic timing and pretty sweet dance moves. Paul McLaughlin (known simply as T.D) plays evil with glee. Faumui is the anchor, holding it all together as the one we love to hate the most. His character has zero remorse – even at the very end.

The very end, as it were, sees each character realise they are never, ever getting out of that room. Watching the revelation dawn on all three faces reminds me of the incomparable power of the theatre. It’s a moment – and a play – that will stay with me forever.