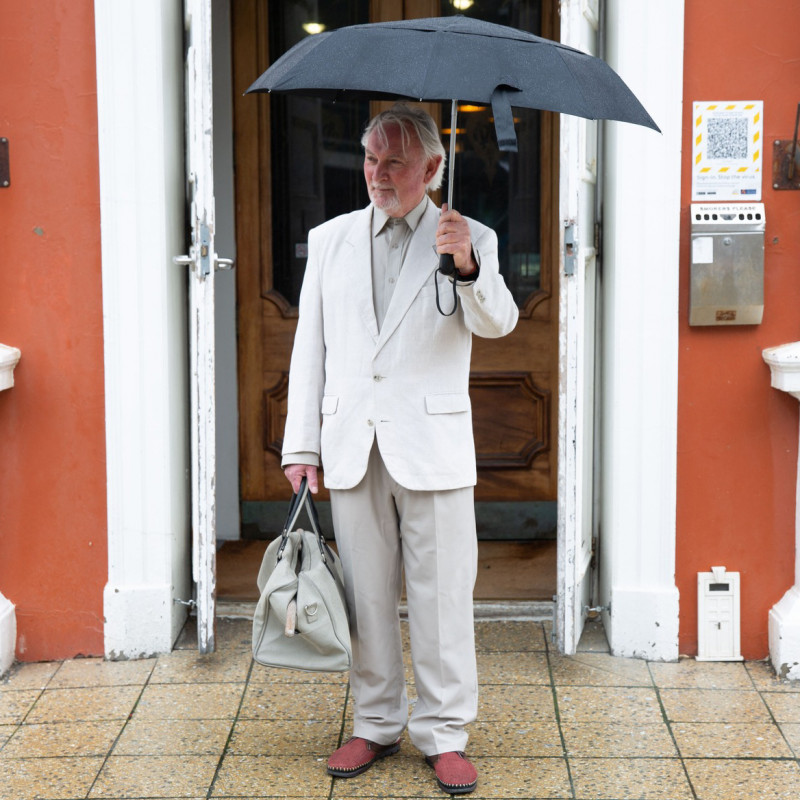 Written by: Will Eno

Theatre veteran Steven Ray has chosen an extraordinary and challenging piece in Title and Deed to perform as part of the TAHI New Zealand Festival of Solo Performance. Although written in 2012, Will Eno’s meandering prose poem is remarkably pertinent to the existential crisis we’ve all been living through for the last two and a half years. The COVID pandemic has made many of us think at some point about the nature of life and death, and what it is to be human. That self-examination is captured beautifully and lyrically in Title and Deed, which is an ultimately uplifting ode to the weirdness of being us.

The skill in Eno’s writing is that it shows us ourselves from a highly quirky outside perspective, that of an unnamed traveller who has recently arrived here with nothing other than a white suit and a bag containing a long stick and an empty box. Is he an alien or is he human? Even by the end of his monologue, I’m not sure. But that doesn’t matter. He tells us plenty about the nature of his unspecified homeland. It is a place of perpetually rumbling blue skies, reverse weddings, and terrible Saturdays where the main exports are sarcasm and uric acid. Despite the traveller’s claim that it’s a weak and dying place, I still have an urge to go there.

Ray’s subtle and engaging performance, Jeff Kingsford-Brown’s unfussy direction, and Niamh Campbell-Ward’s soft lighting design let this strange text comfortably breathe. Thanks to the frequent non sequiturs, Ray occasionally calls “Where am I now?” to the lighting box while staying fully in character. This is a bold and wise choice to avoid the awkward pauses of an actor reaching for his lines in a first-time performance and keeps the quiet energy flowing.

The best theatre makes you think about it well after you’ve left the auditorium and that’s certainly the case with Title and Deed. Long may its blue skies rumble.