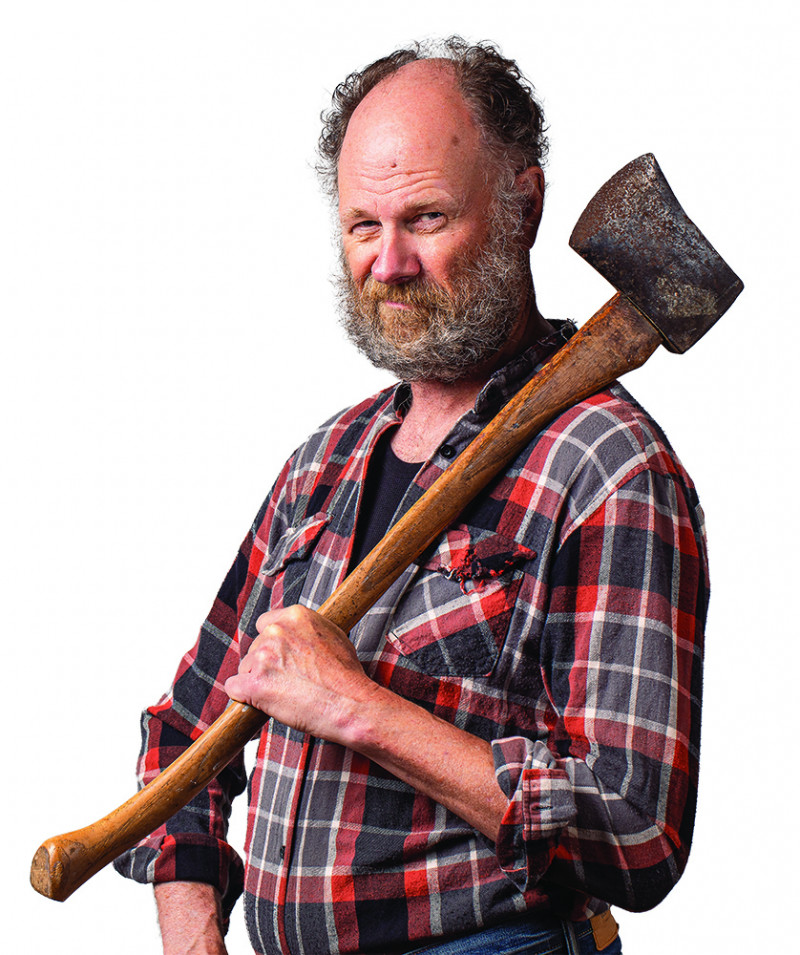 Inspired by the real life and triumphs of world champion axeman and World War I veteran Ned Shewry, Timberrr…! imagines his ‘what might have been’ story when, as a confirmed bachelor, he is in middle age and meets his fictional long-lost son Billy. Ned is a hard-as-nails, take-no-prisoners, outdoors man, while Billy is sensitive, compassionate, and soft.

This central conceit drives the unbroken 85 minutes of narrative (make sure you grab a glass of wine and visit the bathroom before it starts because there’s no interval) as Ned trains up Billy to take on his long-time wood-chopping rival’s brother as the next junior champion. Surrounding them is a colourful bevvy of Taranaki locals with varying interest in the outcome.

I have a soft spot for plays like this with a small cast playing multiple roles on a sparse set with no props, clever tech support, and one set of clothes. It allows the cast and crew to have fun and demonstrate their full range of talents, and allows audience members to engage their brains and use their intelligence to fill in the blanks.

Stephen Papps makes the tough Ned likeable enough to care about, as well as doubling several minor characters. His innuendo-laden, sex-starved femme fatale Eunice is a highlight. As the singing and dancing Billy, Tyler Kokiri is superb. He also creates wonderful human portraits with the bumbling Constable Keith and the growling Whata, among others. Picking up several other supporting characters in Ned and Billy’s rural Taranaki lives is Serena Cotton, who plays both men’s love interests, Herb the wood-chopping commentator, and more with class and verve.

All three actors maintain high energy and pace, switching effortlessly between characters, and the story rollicks along to its naturally satisfying conclusion with a sweet twist along the way. It’s also very funny. If you’re worn out by COVID and everything else going on in the world, get down to Circa for irrepressibly Kiwi comic relief.