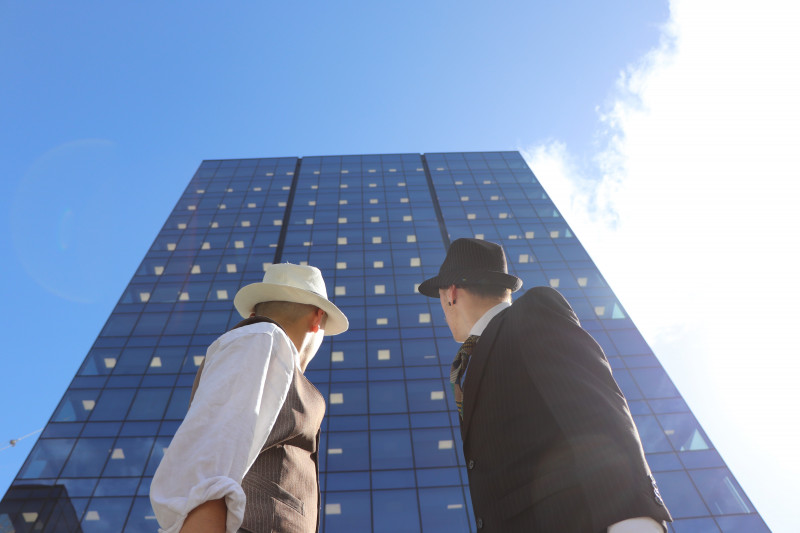 Three fresh-faced, besuited but barefoot office workers unpack their desks and take to their keyboards for the first time. Their introduction to the world of work starts nicely enough as the two main protagonists (Caspar Ilschner and Otto Kosok) settle into their bland pods, wrestle with a box of tangled cables, joke with each other, and persuade their computers to work. However, as they get sucked into the unrelenting grind of corporatism, they are compelled to battle with constant phone calls from unseen managers, tedious meetings, a presentation about the latest financial report, business jargon, the effects of excessive caffeine consumption, and an overbearing competitiveness that descends into a literal and figurative fight for superiority. Finally, a headless, paper-stuffed boss arrives in a red-drenched nightmare to end the destruction and chaos.

Martin Greshoff, as the third corporate lackey, provides a stunning live electronic soundtrack from his desk. His stark melodies are mixed with dial-up modem sounds, computer bleeps and dings, and disembodied voices. A further shoutout to Greshoff for his trombone-playing, which is a tender final counterpoint to his jangling digital soundscape.

Hollie Cohen’s design makes clever use of white cardboard boxes, paper screens, and animated projections that beautifully support the idea of an office environment while allowing the performers to create carnage in safety.

At one point in this highly original performance, a distant voice asks, “Do you work well under pressure?” The answer for these three is clearly and unequivocally, “Nah”.