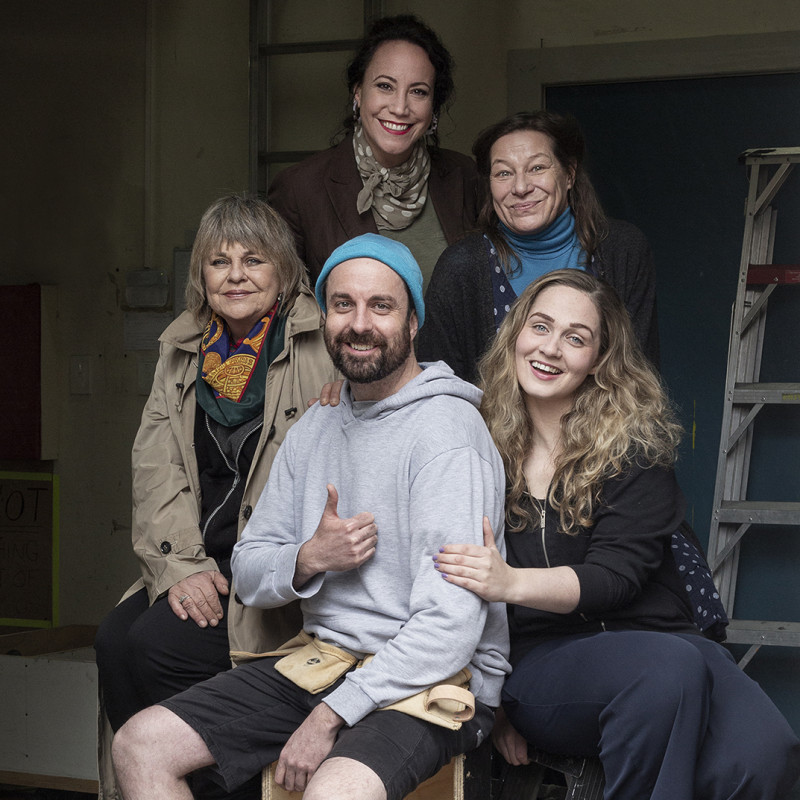 Running at Circa Theatre until 5th Oct 2019

Four women sign up to a carpentry workshop, prepay their fees (a hefty $400 apiece), and then show up to find their tutor Maggie has done a runner. Maggie’s husband Woody (Alex Greig) is none too thrilled about the strangers in his shed, especially not Annabel (Bronwyn Turei), who takes down his smutty calendar in an attempt to dismantle the patriarchy within minutes of arriving.

They’re a group of personalities, alright. Siobhan (Harriet Prebble) plans to seduce someone by building them a kennel (gets ‘em every time), while Louise (Anne Chamberlain) bakes gluten-free, vegan, kale muffins for fun. Horse breeder Helen (Ginette McDonald) will not be bringing a plate, thank you very much.

Michele Amas’ The Pink Hammer goes beneath surface comedy to explore characters that step out of their stereotypes in surprising ways. Woody isn’t as much of an unyielding Kiwi bloke as his name would suggest, Annabel’s fire has its origins, Siobhan is still running away, Louise is carrying a heavy burden, and Helen has just received a big blow. Underlying every beat of the script is the need for human connection and companionship, resulting in a funny but touching play.

Intuitively directed by Conrad Newport, cast members of The Pink Hammer take great care and delight in peeling back the layers of their characters. Highlights include Chamberlain’s sensitive portrayal of loneliness, McDonald’s purse-lipped disdain for affection, and Prebble’s cheeky, charming turn as a lascivious woman with an accent so convincing my friend was shocked to learn she’s not actually Irish. While I happily swallowed most of the script, I’m surprised none of the characters – especially Annabel – called Siobhan out for making unnecessary jokes that trivialised the Holocaust.

The twist ending is beautifully staged, featuring exceptional lighting design by Tony Black that bounces brilliantly off Daniel Williams’ impressive set, and great use of music. I would love to see more integration between the music and the rest of the play, but overall I thoroughly enjoyed this lovely production.