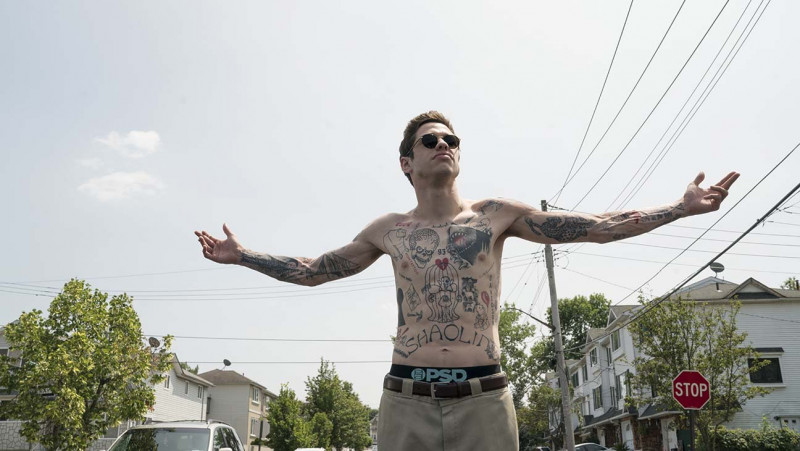 The King of Staten Island

The King of Staten Island directly addresses today’s youth. Structurally, it sticks to a familiar formula, and like many Judd Apatow films, it outstays its welcome. But its fresh subject matter and seasoned supporting cast keep the laughs coming, even if its star sometimes seems disinterested in doing so.

24-year-old Scott Carlin (Pete Davidson) lives with single mother Margie (Marisa Tomei) and sister Claire (Maude Apatow) on Staten Island, New York City. Scott’s father was a firefighter who died in the line of duty, and he has long suffered from depression. He is pessimistic but ambitious, dreaming of one day opening a tattoo restaurant and practising on his friend’s bodies in the meantime. When Margie starts dating Ray (Bill Burr), another fireman, Scott must face his past head-on.

People who are familiar with Apatow’s comedies will not encounter many surprises; a man-child stuck in his immature ways is forced to grow up. However, the characters driving us towards these beats are defined and fleshed out. Tomei stand outs as Scott’s down-to-earth, empathetic mother, as does Burr, who plays to his strengths and delivers more laughs than anyone. He appears as a natural enemy of Scott’s, and the chemistry between the two actors makes it all the more fun. Smaller players Bel Powley, Pamela Adlon, and Steve Buscemi utilise their minor moments to portray rounded characters.

Scott is much less interesting. His story is a recreation of Davidson’s life in most aspects and as a result, the actor meanders through scenes. What I can appreciate is the willingness to embrace a character battling mental illness. Apatow doesn’t treat it as taboo, simply addressing how this individual is dealing with it and allowing him to poke fun at himself. After a while though, this isn’t enough to sustain my interest. Parts of the plot – such as a scene where Scott joins his friends in robbing a pharmacy – are entirely unnecessary and will force many to check their watch, especially astute viewers who will be able to predict what’s coming.