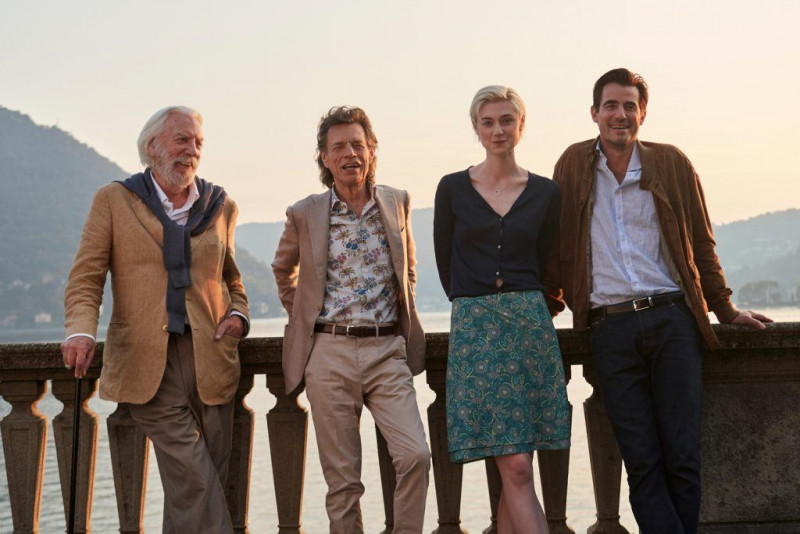 The Burnt Orange Heresy has something to say but no way of saying it. What begins as a compelling critique of the contemporary art scene ends as a flamboyant neo-noir romp. Sadly, the two intentions never effectively coalesce, and the film is forced to rely on a captivating cast to keep us engaged.

Charismatic art critic James Figueras (Claes Bang) and his new fling Berenice Hollis (Elizabeth Debicki) visit the luxurious estate of a powerful art dealer, Joseph Cassidy (Mick Jagger). The true purpose of the alluring invitation is soon revealed; to convince James to steal a painting from Cassidy’s neighbour Jerome Debney (Donald Sutherland), a world-renowned but enigmatic artist whose work has not been seen for decades.

The film’s saving grace is its cast, particularly Sutherland and Bang. Both portray masked men; one who will admit it, and one who won’t. James uses charm and confidence to hide insecurity and rage. We meet him as he teaches a class that Berenice attends. He analyses a worthless painting at length and suddenly, the entire class wants a print, exemplifying the power of the critic. We know we cannot trust James, but we understand why others do. As the weathered artist, Sutherland brings sensitivity to a role that risks appearing pretentious.

Director Giuseppe Capotondi refuses to lean into a single idea, and this lack of clarity often leaves the frame dull and the narrative stagnant. For a film that barely crosses the hour-and-a-half mark, The Burnt Orange Heresy feels painfully slow at times and rushed at others. The story, based on the book of the same name by Charles Willeford, naturally lends itself to a seductive, stylistic noir, but Capotondi sacrifices this opportunity in favour of something he deems more meaningful – an exploration of artistic authenticity. This doesn’t land, and in turn, the film becomes forgettable.

The Burnt Orange Heresy represents a missed opportunity. A talented cast and a bewitching plot let down by a lack of focus.