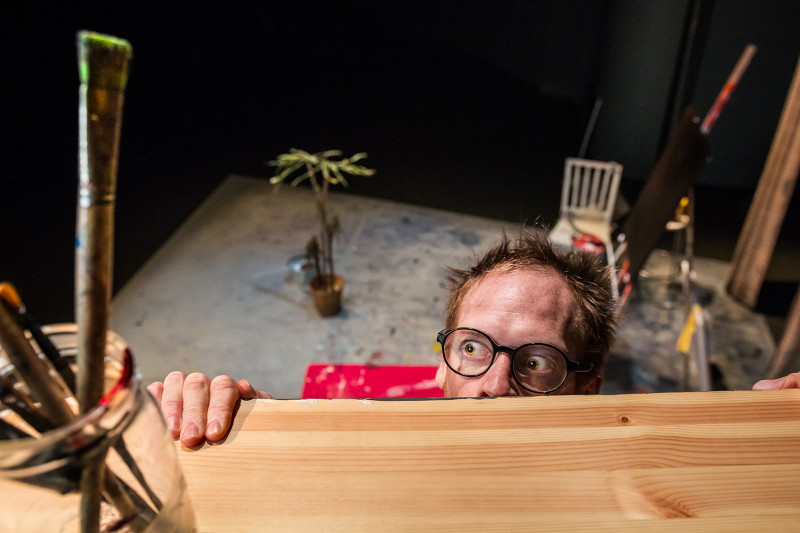 The Artist is a one-man physical theatre show about an artist struggling to find the inspiration for his next masterpiece. While watching someone procrastinate for an hour doesn’t sound all that fun, The Artist is a hoot and a half, filled with circus tricks, impressive physical feats, and more hilarity than you can shake a paintbrush at.

Thom Monckton is immediately likeable as our creative genius, giving off an eccentric hermit vibe. One gets the impression he hasn’t seen the sun and has kept his own company for a while. Thanks to his aptitude for physical comedy, Monckton’s running internal dialogue is entirely audible. His movements are larger than life, his gesticulations wild, his behaviour erratic. Couple this with his total lack of problem-solving skills and you have a riot of a universal, joyful experience for three to 103-year-olds.

Amongst Monckton’s many strengths – core strength being one of them – is his ability to seamlessly interact with the audience. While we’re never made to feel uncomfortable, our responses are perfectly woven into the narrative. His friendly mockery of a phone-wielding patron is a delightfully off-the-cuff moment that adds an extra dimension to The Artist. I quickly forget I’m watching a one-man show. We are brought into the action and root for Monckton all the way.

The lighting (designed by Juho Rahijarvi and adapted by Lucas Neal) and sound design (Tuomas Norvio and Atte Kantonen) work cohesively as one unit to support and highlight the action – especially Monckton’s killer dance moves. Alongside the clever ending (due credit to art consultant Eveliina Hamalainen), the highpoint for me is the bit about the prejudiced bouncer played by a banana. Continuing along the vein of things that will sound bizarre to anyone who hasn’t seen the show (best get cracking), my only criticism is that I wish Monckton had attempted to staple the banana.

Thanks to Monckton and both the international and New Zealand production team for an outstanding return to the theatre.