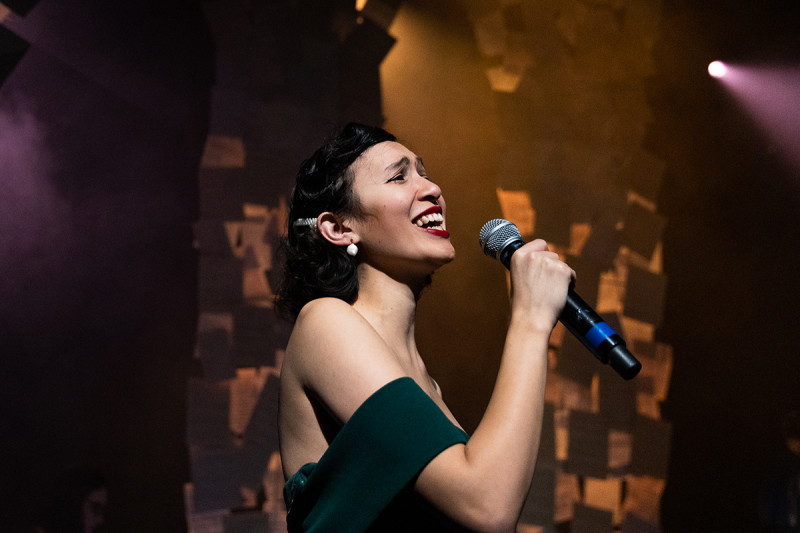 That’s All She Wrote

Everyone should see That’s All She Wrote, for their mothers, for their grandmothers, for their wives, partners, and daughters; and for themselves. Presented by Red Scare Theatre Company, That’s All She Wrote is an ode to women and non-binary creators, vastly underrepresented in the world of musical theatre. The show features music from Broadway greats like Hadestown and Waitress, as well as lesser-known shows such as Don’t Bother Me, I Can’t Cope, and Heterotopia. There is even an original song written by the talented performer Cassandra Tse herself.

The No Man Band, composed of music director Katie Morton, Ellie Stewart, Jevon Wright, and Rachel Hinds, is wickedly talented and the perfect company for their powerhouse performer. Tse is phenomenally talented, and I could listen to her serenade me for hours.

That’s All She Wrote is in the traditional cabaret style. A single mic stands centre stage on a raised platform, the band encircling Tse. Large columns plastered with sheet music seem to scatter into the air and hang there, changing colour, form, and texture with Ruby Kemp’s lighting design. Tse gracefully and purposefully moves around the theatre in her elegant cocktail dress, bringing a dynamic and natural flow to the whole piece. A catwalk divides the audience seating into an upper and lower level, which Tse makes her way along throughout multiple songs. Rachel Hilliar’s set design adds depth and movement to the show, naturally guiding Tse throughout the room during the performance and allowing her to become the musical grande dame of her dreams. The show brilliantly balances history, memoir, narrative, and music.