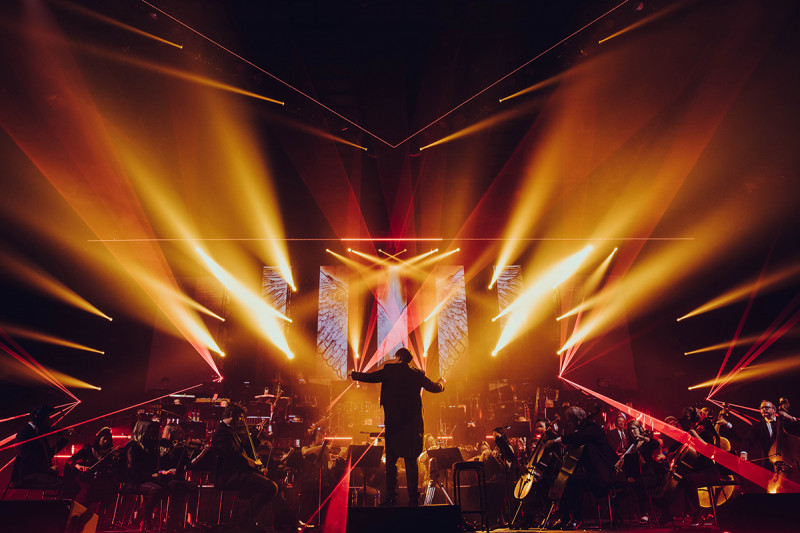 On Friday night at the packed TSB Arena the full might of Orchestra Wellington combined with spine-tingling electronic dance music, played through a state-of-the-art sound system, and featuring a dynamic laser-light show, to create a truly immersive experience.

Synthony has been called “a celebration of the last 30 years of dance music” and the audience, singing and dancing for almost two hours, would agree.

The set by DJ Greg Churchill warmed the crowd up, and it was clear that by the time George FM DJ and host General Lee introduced conductor Brent Stewart and Orchestra Wellington, it was time to party!

Some of the most iconic electronic dance tracks were reimagined with full orchestral power to sound like nothing heard before: Fatboy Slim’s Right Here, Right Now, Avicii’s Levels, Rudimental’s Feel the Love, and the encore of Darude’s Sandstorm were standouts. Eric Prydz’s Proper Education – powerfully sung by Jason Kerrison – and Cherie Mathieson’s sultry version of Eurythmics’ Sweet Dreams (Are Made of This) had the audience singing loud enough to almost raise the roof! Jason’s guitar playing on Don't Hold Back gave the song an exciting edge.

Ria Hall was in sublime form – especially with the last track You Got the Love. The other guest vocalists Hannah Rees and Nate Dousand, together with the silky-smooth saxophone of Lewis McCallum, had the audience in the palms of their outstretched hands.

It was a sensory overload – a spiritually uplifting and almost joyous occasion, and the addition to the stage of the five-piece drum group Taikoza only added to the pulsating, climactic last tracks.

However, the party wasn't over yet – there was still another set by DJ Dick Johnson to keep the capacity crowd of 4000 happy and dancing into Saturday morning.

Overall, this was a stunning production by founder Erika Amoore and arranger Ryan Youens, helped by the slick host work of General Lee. I highly recommend Synthony to anyone that likes a dance party – especially as Ibiza's probably out for a while yet.