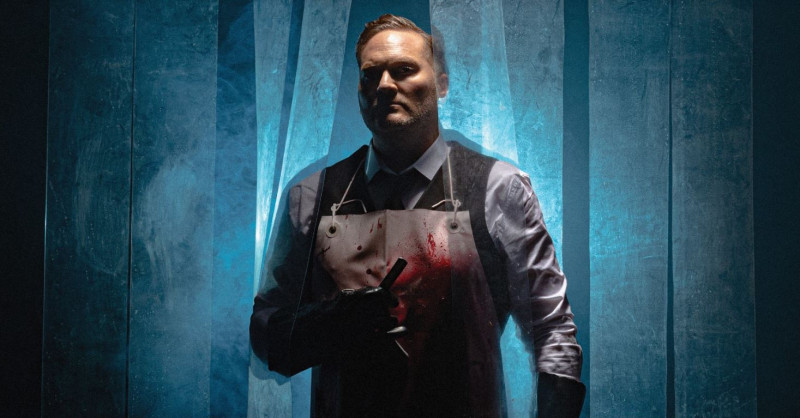 With music and lyrics by Stephen Sondheim and book by Hugh Wheeler, many of us have attended the tale of Sweeney Todd. The musical follows the titular barber (Chris Crowe), who lost his wife and daughter Johanna (Olivia Stewart) to a great injustice at the hands of Judge Turpin (Thomas Barker) and Beadle Bamford (Jthan Morgan) some 15 years ago. Finally released from his internment, Sweeney returns to the “hole in the world like a great black pit” that is London hell-bent on vengeance. Here, he sets up shop with pie maker Mrs. Lovett (Vanessa Stacey) and earns his appellation as The Demon Barber of Fleet Street.

It’s fascinating to see a large-scale musical with mammoth production values in an intimate space like Te Auaha. Seated in the very front row, my friend and I are at eye-level with action befitting a grand stage. This is deliciously overwhelming, especially in the ensemble numbers, made magnificent, dizzying by choreographer Greta Casey-Solly and honed to vocal perfection by music director Mark W Dorrell.

Giving us some welcome breathing room, some of the goriest scenes are set further back behind plastic strip curtains reminiscent of a slaughterhouse. Joshua Tucker’s inspired design screams of rank despair… God I love it.

Both lead actors inhabit their roles in this dark, dank world entirely, Crowe with his thousand-yard stare, Stacey with her wicked spark. Together they are twisted, tormented dynamite. Sending shockwaves down my spine is Crowe’s Epiphany, with his world-class vocals heightened by Stacey’s journey from shock to terror to resignation, all in the shadows.