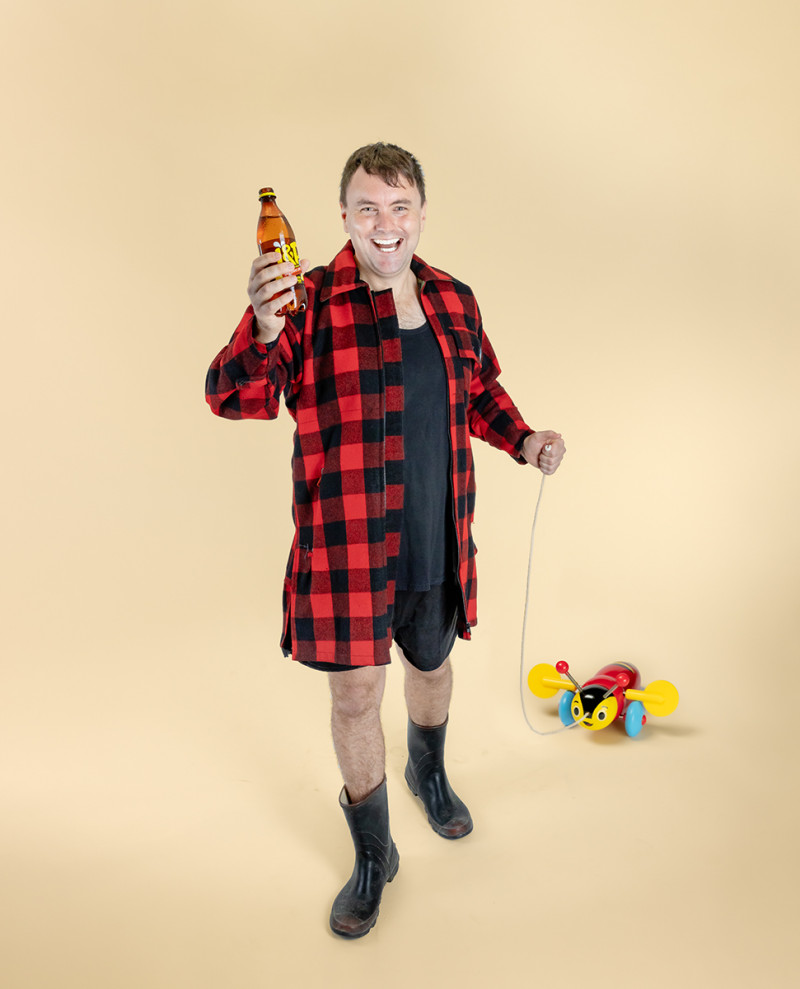 You may recognise writer, actor, director, and comedian Tom Sainsbury from Wellington Paranormal or Give Us A Clue, a televised charades gameshow hosted by Paula Bennett. The former deputy prime minister of New Zealand is one of the many politicians Sainsbury has parodied on social media app Snapchat, so working with her on the show was quite the hoot, he tells us between endearing drags of his imaginary cigarette. Endearing because as he says, he doesn’t smoke in real life, only in his reenactments of it.

Snapchat Dude Live! is a mix of banter, storytelling, and Sainsbury’s famous Snapchat satires of middle New Zilunders. Snap videos of these impressions are projected onto two screens shaped like smartphones that form the centerpiece of the show (set by Chris Reddington, technical by Peter van Gent and Paul Randall). With wigs, a few costume staples, clever scripting, and whip-smart timing, Sainsbury interacts with pre-recordings of his characters live to tell a story in real time. And what a story it is!

I never thought I’d be so invested in a quietly sensitive lumberjack and a not-alcoholic cat lady who played hockey in high school. But Gav and Liz, I love you and I love your love.

Sainsbury brings his characters to life with a glint in his eye and a spring in his step. He adds a layer of depth to the shallowest of them and makes me like even the most unlikeable ones (although still screw you Tracey and Stacey) with the strength of his storytelling and performance.

I’d love to see Sainsbury’s confidence come up a notch when he’s interacting with the audience as himself. He tells some killer jokes and personal anecdotes that he doesn’t quite let land, moving on too quickly when we’re still busy laughing. I hope this doesn’t come out of a fear that he’s not as funny as his characters, because he certainly is.

Wicked fun and unexpectedly touching, Snapchat Live! is a blast from beginning to end with all the snooty cats in between.