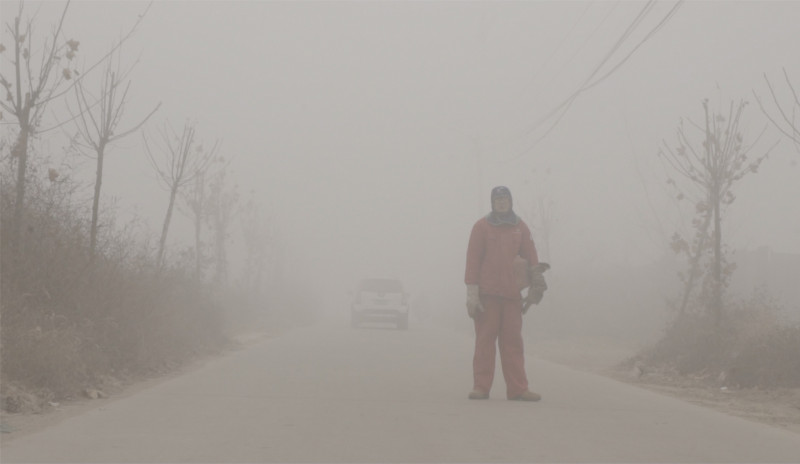 Smog Town successfully humanises environmental destruction at ground level. The documentary makes the overwhelming effects of pollution tangible by closely examining an individual example. We see the physical, emotional, and economical scars it leaves behind, serving as a powerful warning for the rest of us.

Langfang, a city in the Hebei Province of China, consistently ranks amongst the country’s most polluted regions. It is cloaked in smog, and the government has reached a point of no return where drastic measures must be taken “for the defence of the blue sky”. We follow author and deputy director of Langfang’s Environment Protection Bureau Li Chunyuan as he inspects homes and businesses using damaging fuels and materials, seeking to lower the city’s air pollution ranking.

Director Meng Han separates Smog Town from other environmental documentaries by including diverse perspectives without picking sides or shaming any party. On a bureaucratic level, Li is emotionally attached to the issue and aware that his job is on the line should he fail. He is the perfect figure to lead us: empathetic, strong willed, and effortlessly inspiring. Li understands that while he must make harsh decisions to better the environment, those decisions have the potential to wreck the lives of people who are already struggling. After he is forced to shut down a spray painter’s business, we follow the man closely as he vies for a licence to continue his work, quickly realising his efforts will be frivolous.

Meng uses the camera to observe, not interrupt, which gives the film a true sense of authenticity. Images of cars suddenly appearing from the smog on an invisible road say more than any narration could. However, scenes providing historical context would have pushed the impact of these moments further.

Smog Town ends on an appropriately sombre note, leaving the audience with a rounded understanding of the hefty topic it delves into. As many great documentaries do, it refuses to judge or provide answers, instead presenting the raw truth in its purest form.