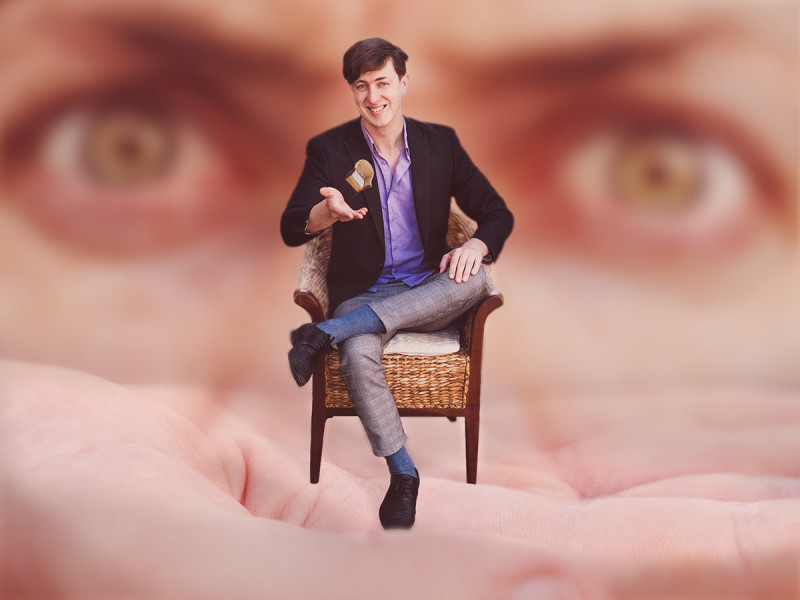 As I write this review it feels like the world is on fire. Certainly, Parliament grounds are literally on fire. But thinking back to the Fringe show I went to last night provides a wonderful escape, as did seeing Shift Your Paradigm. I truly forgot about all my troubles and cares – and our global ones too – for one hour thanks to this hilarious, twisty-turny, emotional rollercoaster of a production.

Eric (David Bowers-Mason) is the senior CEO of Do Be Us, a company that is not at all dubious and totally not a pyramid scheme. Under the all-seeing eye of the High Chair Man (Kevin Orlando), Eric has excelled in selling heaps of chairs (read: enlisting others to do it for him) and is now headed for a promotion. With the help of his junior-CEO-in-training Zoe (Isabella Murray), he just has to offload the last 25 of the latest collection before the ink on his new vague contract is dry.

Bowers-Mason is a gifted actor who rides the highs and lows of a desperate man with ease and panache. Murray acts as an anchor and counterpoint for Bowers-Mason’s performance so it doesn’t reach hysterical heights. And then we have Orlando, who reminds me instantly of The IT Crowd’s Matt Berry and might be just as funny. Appearing only onscreen but with excellent comic timing is Adam Herbert as the Fax Man, while Sara Douglas plays Eric’s sister Jessica with sensitivity that beautifully balances the action.

Shift Your Paradigm has high production values, with projection design (projector by Emii Wilson, graphics and filming by Mitchell Botting) greatly enhancing the experience – especially thanks to clever FaceTimes projected onto the screen. Coupled with cohesive, dramatic sound (Wilson) and lighting (Herbert), the show reaches multiple climactic points that put me in mind of watching a thriller on the big screen. Thrilling!

A huge bravo to all involved in the witty and raucous Shift Your Paradigm. Thanks for taking me out of my life for a hot minute!