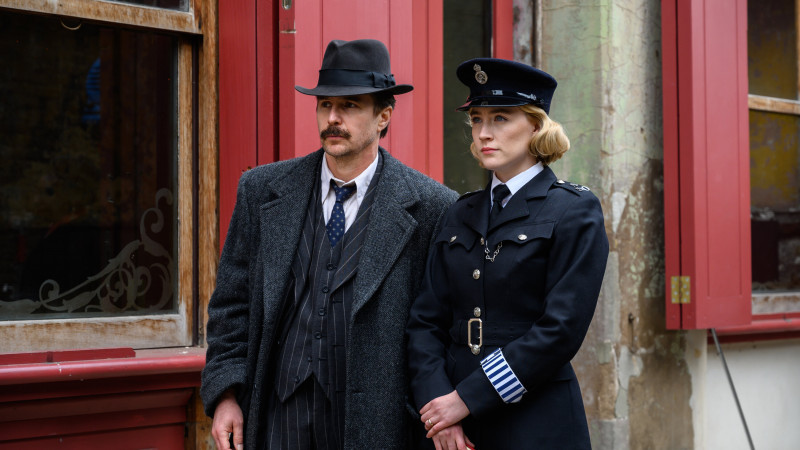 See How They Run

The latest whodunit to hit theatres is Tom George’s See How They Run. Following in the footsteps of the popular 2019 Knives Out, the film adds comedy to the mystery, making for a playful well-devised puzzle.

In 1950s London, plans for a movie version of Agatha Christie’s smash-hit play The Mousetrap come to an abrupt halt after the director is murdered. When a tired inspector (Sam Rockwell) and an eager rookie constable (Saoirse Ronan) take on the case, they find themselves thrown into a puzzling whodunit within the glamorous world of theatre, investigating the mysterious homicide at their own peril.

See How They Run’s opening sequence sets the scene perfectly. Led by the voice of Academy Award winner Adrien Brody, we get a taste of the postcard mid-20th century London setting and meet a range of suspicious characters before a sudden murder gets us armchair detectives in the mood to try and solve the mystery.

Rockwell and Ronan’s chemistry is brilliant. Their banter is both awkward and funny with plenty of running gags and Ronan in particular steals the show with her warm, upbeat performance. Although the narrative and final twist may have fallen flat for more demanding whodunit viewers, I thoroughly enjoyed the final reveal. Yes, this is partly because all of my many guesses during the film were wrong! However, looking back, George and writer Mark Chappell dropped enough subtle clues to make picking the killer possible.

The fictional story is tied in with some true elements. For those who don’t know, The Mousetrap is a real play, and the film even bases some characters on members from the original cast such as Richard Attenborough and Sheila Sim. This was a unique element and only added to a plot that pokes fun at the classic works of the genre. See How They Run also combines fun flashbacks, engaging editing, a suspenseful score (Daniel Pemberton), and colourful aesthetics to provide the audience with enough whodunit constants to keep them involved in the mystery.

Told with fun energy by a fantastic cast, See How They Run may be slightly forgettable once the credits roll, but it is still an hour and a half well spent.