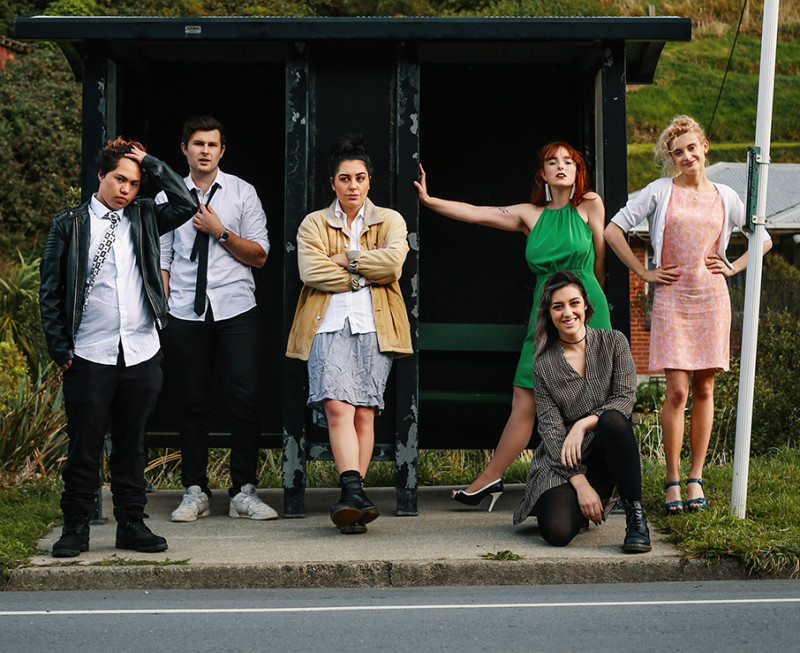 Running Late is the story of one remote, rural, decrepit bus stop, and six of the unlucky people that come across it.

We first come across the bus stop via Jamie (Emma Katene), a schoolgirl who’s been dropped off there indefinitely. She’s pissed off, and the only sustenance she has is half a bottle of scrumpy and a ratty cigarette (but she doesn’t have a light). Over the course of three days, she meets Lucy, or Ruihi (Kelsey Robson), a big-city Māori; the kinda-familiar Charlie (Shay Tanirau); wasted white boy Nick (Jackson Herman); and squabbling BFFs and maybe-lovers Sam (Courtney Rose Brown) and Jules (Harriet Hughes).

One of the best parts of the show is undoubtedly the set, designed by Anne-Lisa Noordover. It is perfectly detailed, down to the brown harakeke leaves and empty bottle brushed under the bus stop seat.

The scenes, connected piecemeal by Jamie, the setting, and a nearby wedding, are for the most part strong. A stand-out is the first sequence with Charlie, when Jamie realises he’s an old friend of hers that has come out as a trans man. The dialogue, peppered with Kiwi-isms, is awkward, funny, and sweet.

Other scenes don’t quite land as nicely. The opening scene between Jamie and Lucy/Ruihi, for example, never quite settles. It struggles to make the connection between the pair feel genuine, partly because we just don’t know them very well yet.

It’s unfortunately the weaker moments of Running Late that make me question its cohesion. As a slice-of-life piece, it does have a lot of valuable insights into modern-day Aotearoa. It’s just that, at times, the bus stop device doesn’t quite work. The realism of the dialogue pushes against its framing; we have to suspend our disbelief a little too far, too often.

Running Late is an exciting example of theatre inspired by everyday New Zealanders. Toi Ngākau Productions, the talented team behind the show, is a company to watch.