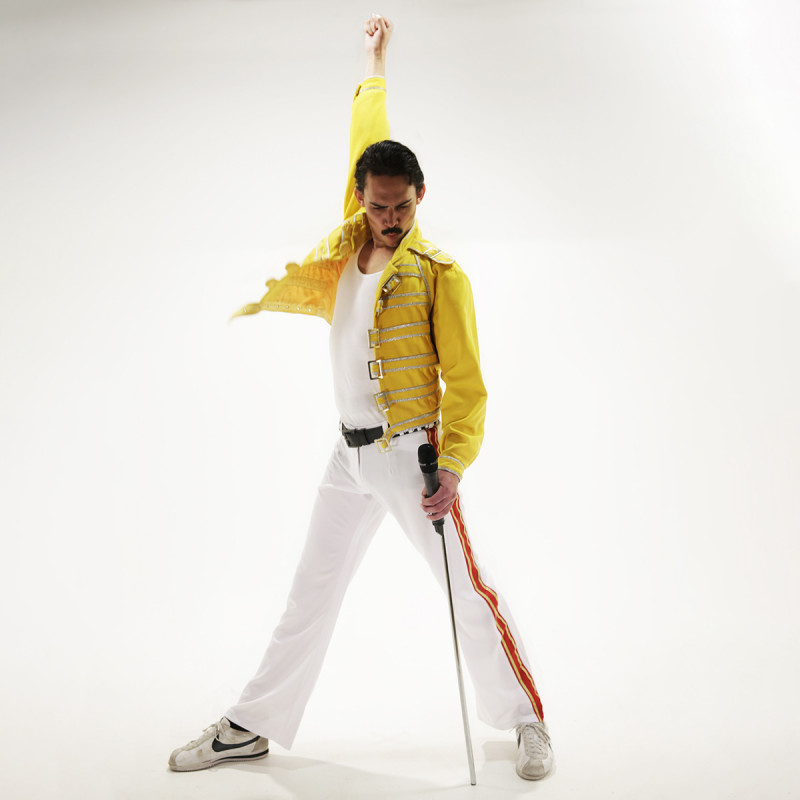 “Are we gonna have fun tonight Wellington?” shouts Freddie Mercury (Dominic Warren) during the concert starter A Kind Of Magic, and it’s obvious the audience is in for an interactive experience.

“This is a rock ‘n’ roll gig so we’re gonna treat it as a stadium – on your feet!” This at the start of the second track Radio Ga Ga, and we are up dancing!

This concert is a recreation of the 1986 World Tour – and a lot of attention has been paid to ensure the authenticity of the costumes, instruments and equipment, background videos, stunning lightshow, and state-of-the-art sound system.

All their biggest hits follow: Another One Bites the Dust, featuring the solid bass guitar of John Deacon (Nigel Walker), Play The Game and Killer Queen, with Brian May (Luke Wyngaard) exquisitely playing the famous guitar riffs, Fat Bottomed Girls and Tie Your Mother Down featuring a thunderous but impeccable drum solo by Roger Taylor (Michael Dickens). Bicycle Race, Save Me, Don’t Stop Me Now – after which Freddie asks for a selfie with the band, and for the audience to stand and raise their hands, with Crazy Little Thing Called Love closing the first half.

A frenetic I Want It All starts the second set, with It’s A Hard Life segueing effortlessly into You’re My Best Friend. A superb guitar solo by Brian May is followed by I Want To Break Free, whereupon Freddie (in drag) comes down into the first few rows to sit on a few male laps – rubbing some with his feather boa!

The hits keep coming – Hammer To Fall, Under Pressure, Somebody To Love, We Are The Champions – with the last song of the set the anthemic We Will Rock You.

The encore starts with Love Of My Life featuring Brian May’s sublime acoustic guitar playing and gorgeous vocals by Freddie, finishing with a climactic Bohemian Rhapsody.

Overall a clever, well-spaced production that, with the strong vocal harmonies and musicianship of the band together with Freddie’s powerful vocals and stage presence, creates an enjoyable Queen experience.