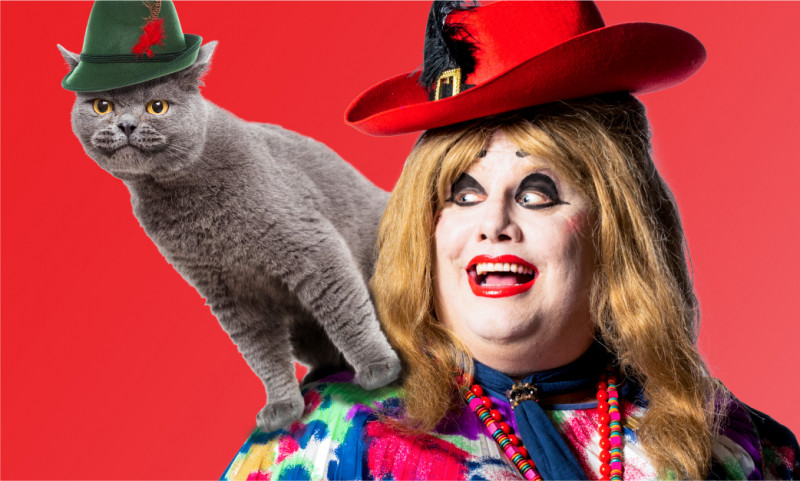 Puss in Boots The Pantomime

Running at Circa Theatre until 23rd Dec 2018

In a sad shack in Aro Valley, Camilla Miller (Gavin Rutherford) and her son, Arthur Miller (Ben Emerson), struggle to get by. Hoping to catch a break after the death of Mr Miller, the family is excited to receive his last will and testament by way of NZ Post (/the supermarket/the lotto shop/the liquor store). That is, until they discover he’s squandered every last cent of his hard-earned dough during a mid-life crisis. He does, however, leave them one thing: a cat (Jonathan Morgan). The cat talks. And, well. You know the rest.

This was one of my favourite performances of Rutherford’s, whose ad-libbing was a show (and year) highlight. Ben Emerson was suitably silly and wide-eyed as the Dame’s parkour-practising son, while Simon Leary added a sensitive touch to the cast as the gormless King Justin. Morgan’s sultry, slinky Puss in Boots was beautifully balanced against Natasha McAllister’s sweet yet sassy Princess Martha (hiya!).

Carrie Green and Jeff Kingsford-Brown nearly stole the show as the nasty trolls (boo!). Their performance of The Logical Song by Supertramp (incredible musical direction by Michael Nicholas Williams) was the best unexpected musical number I’ve witnessed at the theatre for a very long time.

It’s a well-known fact that Circa’s annual pantomime features adult jokes, and last year I commented that I found some of them inappropriate for children. I felt there was a marked improvement this year, with the lewdness less explicit and not nearly as likely to cause unwanted questions around the dinner table.