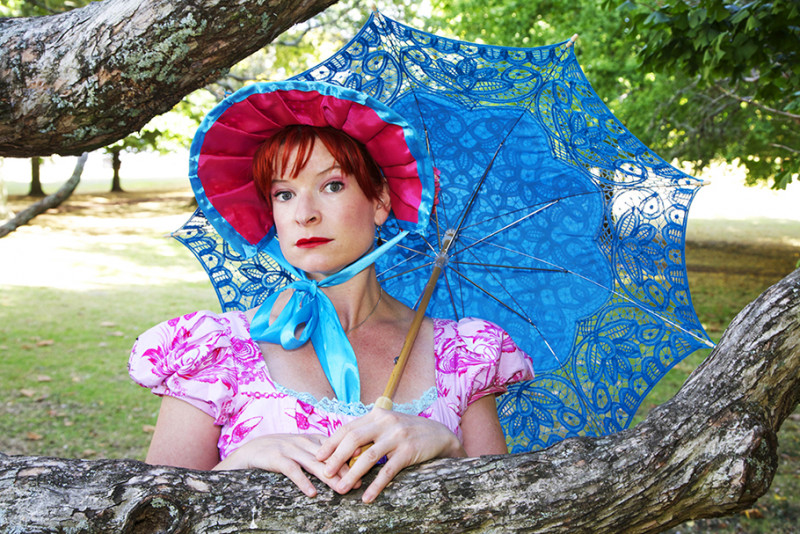 I would describe myself as a fairly mild Jane Austen fan. I reread Pride and Prejudice once every year or so, I’ve dipped my toes into Sense and Sensibility, and have studied Northanger Abbey. I wondered if I would be able to keep up with Promise & Promiscuity, Penny Ashton’s Jane Austen-inspired show. Luckily, the show is filled to the brim with jokes that will delight fans and novices alike.

Austen herself is listed as a co-author by Ashton. The wonderfully witty script follows a clear Austen blueprint, meaning even those who haven’t dived too deep into Regency-era fiction can follow the bulk of the jokes and references. That said, Ashton kidders up plenty of twists and jokes to keep the story feeling fresh and alive. I particularly enjoy Ashton’s ability to mimic the hilariously formal language of an Austen novel whilst also relishing in the wordplay that delivers a good chunk of the humour in the original texts. Modern references break up the more archaic chunks of dialogue, and always elicit a good laugh from the crowd.

From the get go, it’s clear Ashton is a mind-blowing performer. Despite being a one-woman show, Ashton flits between a whole host of characters with ease. Each character she embodies is a clear caricature for anyone who has read any Austen at all, from the overexcited sister and blustering mother to of course a calm and coolly intelligent heroine. Crowd favourites include a fantastically grim rendition of Pride and Prejudice’s Mr Collins, with Ashton punctuating every other word with a raucous snort that leaves the audience in stitches.

I’m impressed by Ashton’s ability to keep up the energy. She spits out wordy dialogue, sings, dances, and plays with the audience with astounding control, and never once seems out of breath with it all. Promise & Promiscuity is one high-octane Regency romp, perfect for anyone who is looking for a lighthearted laugh.