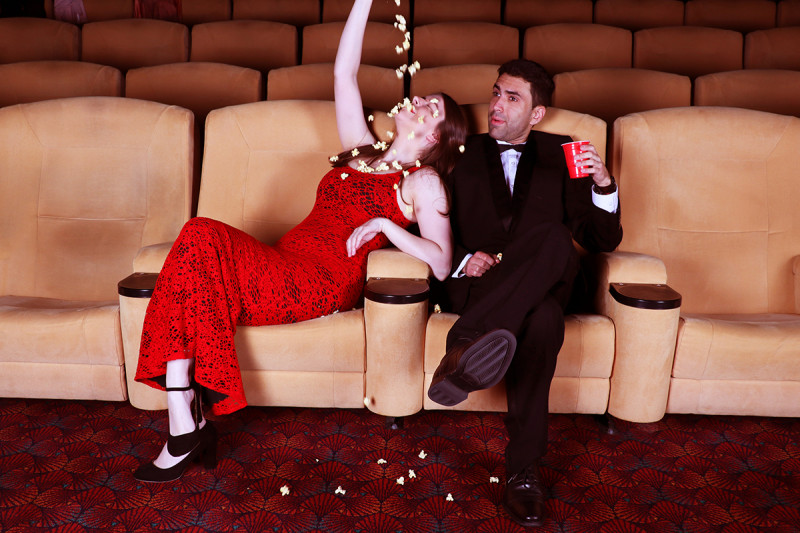 Bruce Delamitri (Max Nunes-Cesar) is a Hollywood hotshot who makes gratuitously violent films in the vein of Quentin Tarantino. When he wins an Oscar to the delight of his producer Karl (Martin Hunt), the critics rage. What message does it send to our most vulnerable members of society when we honour someone who glorifies guns?

Bruce is about to find out. When the infamous Mall Murderers, Wayne (Jonathan Beresford) and Scout (Sara Douglas), break into Bruce’s home while he’s doing the horizontal tango with aspiring actress Brooke Daniels (Stacey O’Brien), his very artistic integrity is in danger. Oops, I mean the thing he’s supposed to care about: his family, estranged wife Farrah (Tammy Peyper) and teenage daughter Velvet (Kaley Lawrence).

Directors Oliver Mander and Isaac Borgman have made some interesting choices for this Wellington Repertory Theatre production, like projecting images (read: visual innuendos) onto a screen that I end up liking after initially suspecting a glitch. Tanisha Wardle’s AV design is quick and clever, cinematising the action but sometimes overmilking the play’s raunchier elements.

Of which there are many! The actors do well to communicate passion and lust, particularly O’Brien, though I won’t spoil the motive of her pantyhose striptease here. Douglas too embodies desire, making Scout’s love for Wayne so believable, she somehow turns a maniac into a likeable character. The chemistry between the two actors and her gift for comedy helps, too.

Not likeable is Bruce. I’d be interested to see a full-on villain interpretation of the character, as Nunes-Cesar’s gentle approach suggests an attempt to portray nuance that isn’t there. I’m blaming the playwright for this, and for the clunky writing that makes Karl suddenly start ranting about the Mall Murderers for no reason, unaware that they are in the very same room as him?

Wellington Repertory Theatre have brought Popcorn to the stage with respectful trigger warnings, high production values, and a committed cast and crew. It’s a hell of a romp, not suitable for the faint-hearted.