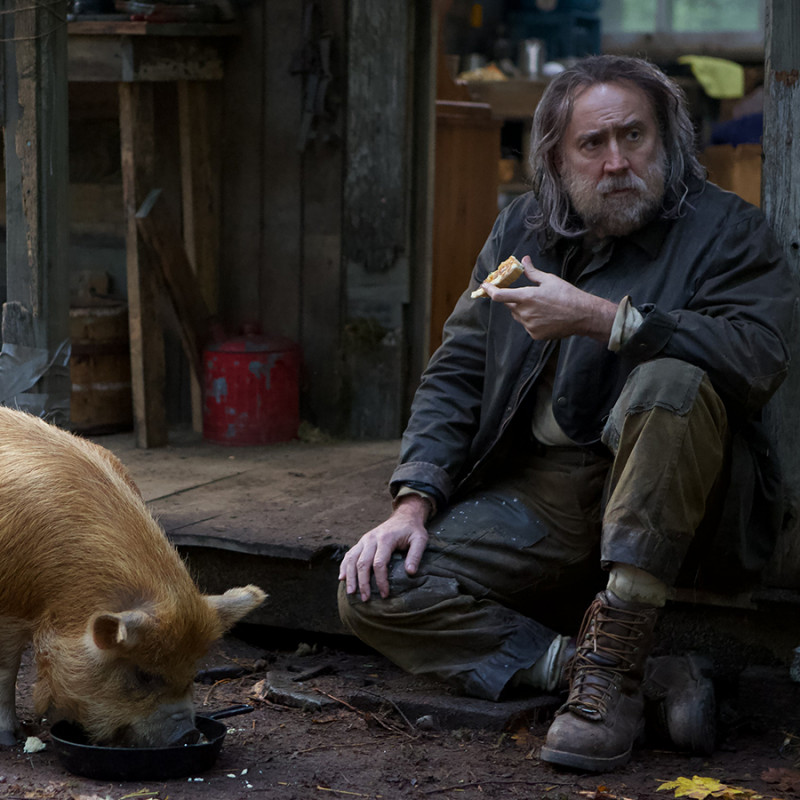 An unusually restrained Nicholas Cage, dark secrets of a notorious past, and a pig drive this melancholic and often aloof tale. Writer-director Michael Sarnoski strives to find depth in sparsity, meandering through an increasingly disenchanting story led by a promising character we observe but, sadly, never absorb.

Rob (Cage) is a recluse living in a cabin deep in the Oregon forest. His only companion is his pig, his only income the truffles she helps him find, which he trades with high-end restaurant supplier Amir (Alex Wolff). One night, Rob is attacked and his prized pig is stolen, forcing him back to the city to find the people responsible.

I know what you’re thinking, John Wick 4 has arrived early. Well, not exactly. This isn’t a revenge picture, and far more closely resembles a Leave No Trace than a Taken. What we have with Pig, on the surface at least, is a film about isolation, but beyond that I can’t decipher what it’s trying to say. Rob appears to be an interesting man, complete with a shady past, an apocalyptic worldview, and the ability to cook Michelin star-worthy meals in the middle of the woods. And yet, as we are drip-fed answers to the riddles he invites, I’m left more and more unsatisfied.

That said, it’s never for lack of trying. Patrick Scola’s photography is undeniably rich; the aromas of damp moss and bark permeate the screen when we hunt for truffles alongside Rob and his pig, while the bright lights of high-society Portland blur into a trippy kaleidoscope of artificiality. Our leads, Cage and Wolff, are each as compelling as the other, Sarnoski simply hasn’t given them enough meat to chew on. When he tries to toss in a left-field idea – an underground fight club for wealthy restaurateurs, for example – it comes off disingenuous in a film that otherwise lacks urgency.

Stylistically, Pig is an intriguing debut for Sarnoski, and with the right story he could surely soar in the future. This just wasn’t it.