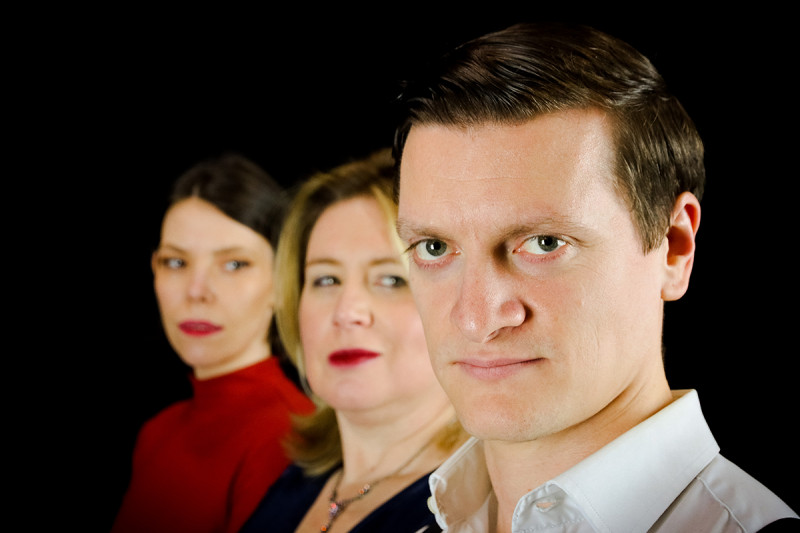 The source of the contention that “Hell is other people”, No Exit is Jean-Paul Sartre at his bitingly existentialist best.

In Stagecraft Theatre’s impressive production, the three protagonists are as far from fire and brimstone as it’s possible to get in their poppy 1970s TV-show set (Amy Whiterod) with its amoeboid shapes, bright colours, and harsh lights (Devon Heaphy). With only three couches, an abstract bronze sculpture, a doorbell that doesn’t work, and an ominous knife on a shelf, this is a stunningly unbiblical place to spend eternity.

Pacifist journalist Joseph Garcin (Slaine McKenzie) is the first to be introduced to this garishly claustrophobic damnation by a jaded valet (a brief but excellent George Kenward Parker) who has seen it all many times before. Not far behind Garcin is Inez Serrano (Kate Morris), the only one of the three who knows she’s damned, and finally rich socialite Estelle Rigault (Karen Anslow). Their layers of apparent respectability are quickly peeled away as the truth is revealed about why each of them has been sent to The Bad Place. They come to the steady realisation that they are, in fact, each other’s torturers, destined to taunt and tease each other forevermore while those they left behind on Earth forget them.

McKenzie, Morris, and Anslow are equally strong and each inhabits their deeply flawed character with conviction and energy, never letting the pace drop or the latent brutality of these immortals lapse into sympathy. Joshua Hopton-Stewart’s slick direction keeps the movement flowing in the intimate acting area created by a well-chosen three-quarters seating layout that cleverly emphasises the discomfort of watching three people tear each other apart psychologically. The wardrobe (Helen Mackenzie) has a 1940s vibe, while also seeming appropriately modern.

This surprising production succeeds in making it easy to laugh at three vile bodies while having the uncomfortable feeling in the back of your mind that a special kind of Hell could be waiting for all of us.