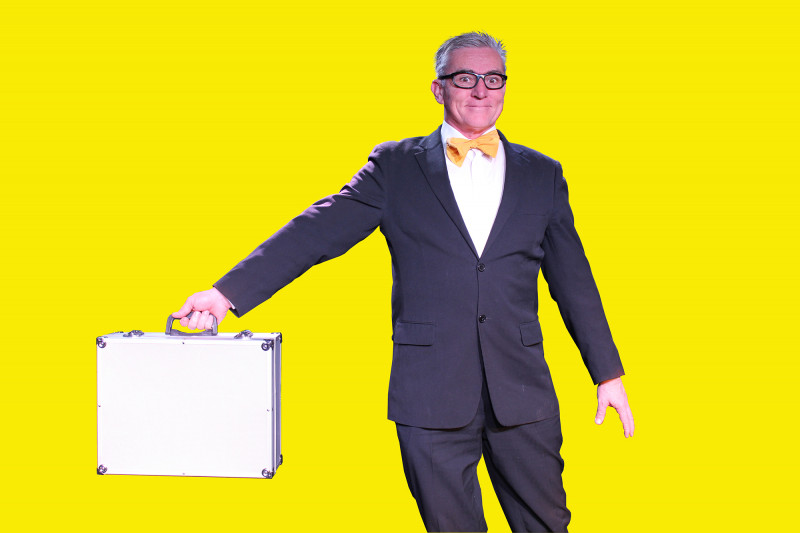 Running at Circa Theatre until 16th Oct

New Zealand’s loudest mime takes the stage at Circa Theatre to deliver school holiday fun for kids aged four to 94. This short, snappy, silly show starts with Fergus Aitken’s beloved Mr Fungus enjoying a coffee at home before a radio ad reminds him he’s got to get to Circa… we, the audience, are waiting!

The first half of Mr Fungus sees him riding the bus and battling the elements to make it to the theatre on time and the second is the show itself, where Mr Fungus bursts through the curtain of a light-up box that serves as a stage on the stage (meta set design by Aitken himself).

This structure is easy to follow for the kids. Even with very little dialogue they seem to keep their place and increasingly become more engaged, yelling suggestions like “check your suitcase!” or “the other banana!” or “I don’t know who that cat is!” or “Poppa, that’s where Cinderella was born!” Kids say the darndest things.

Though this isn’t an interactive or improv show so to speak, Mr Fungus responds beautifully to the littlies, giving them their moment in the sun while teasing them just a tad before driving the action forward. It’s clear how much the children love the show, especially when it comes to the addition of colourful props like the flying, farting balloons that make up the spectacular finale.

As a grownup (legally speaking), I’d love to see Aitken ham it up a bit more when things go wrong. For instance, when a juggling ball or a banana is dropped, a slapstick slip gag would satisfy that diabolical desire for disaster that kids have but that I don’t because adults are much more sophisticated than that…

What strikes me the most is Aitken’s gift for physical comedy. The way he embodies multiple characters with a simple gesture or makes his body appear weightless while fighting Wellington’s driving horizontal rain and gale-force winds (highly effective sound design by Aitken and director Fraser Hooper) is simply astonishing. Bravo!