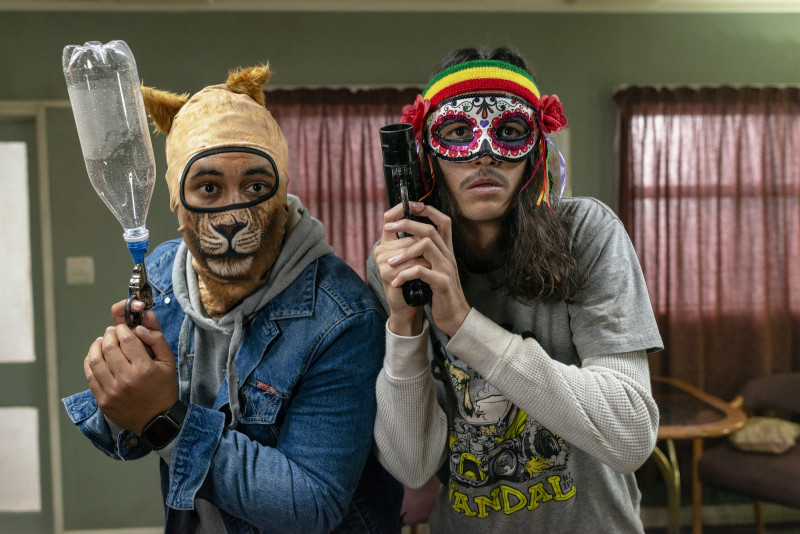 A crime-comedy through and through, Lowdown Dirty Criminals revels in its over-the-top plot, violence, and Kiwi humour. At 86 minutes, it lacks the breathing room needed to properly acquaint us with its likable characters, instead choosing to deliver a brief, adrenaline-fueled romp.

When Freddy (James Rolleston) loses his pizza delivery job, his best mate Marvin (Samuel Austin) sets up a meeting with a ruthless crook, Spiggs (Scott Wills). When they muck up their first job, Spiggs demands they make amends by killing a gangster, an effort that lands the duo in hot water with an even more terrifying foe, The Upholsterer (Rebecca Gibney).

Writer David Brechin-Smith plays to genre, filling his script with delicious archetypes that give the cast infinite opportunities to go big. While Freddy is our guide, Lowdown Dirty Criminals is an ensemble effort at heart. Each actor brings colour to their role, from Rolleston’s hilariously naïve Freddy and Wills’ jacked-up, egocentric Spiggs to Gibney’s deliciously evil Upholsterer. Each member of the cast is given spots of action and comedy, which they almost unanimously nail.

The film has its foot on the gas at all times. While this pace works for its exaggerated style, it relents character development in the name of fun. Don’t get me wrong, it is very, very funny. But further investment in the relationships would have dramatically turned up the intensity. We buy Freddy and Marvin as mates, but that’s where it ends. We buy The Upholsterer as a scary gangster, but that’s where it ends. Life-threatening situations feel trivial, and with an additional 20 minutes or so, we could have become more engrossed in these people and the things that happen to them.

This movie is not one for the squeamish, but perhaps in these times some crazy fun is exactly what we need. Director Paul Murphy has crafted a uniquely Kiwi take on a well-worn genre. As a result, Lowdown Dirty Criminals stands out amongst our film library.