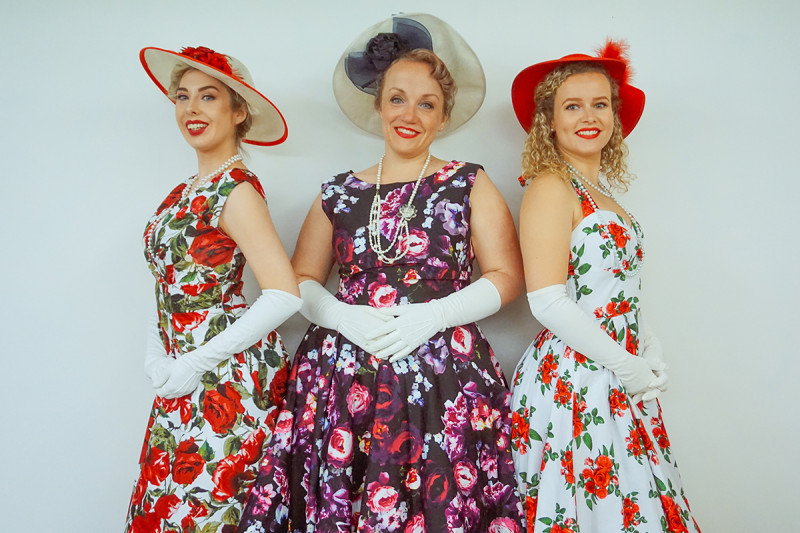 I’ve always been a lover of musicals, so of course I had to attend Ladies in Black. Musical theatre and light-hearted feminism? I’m beyond excited.

Set in 1950s Sydney, the story follows Lisa (Tara Canton) as she starts her first job at a clothing store, Goodes. Through the relatable phenomenon of workplace bonding, Lisa learns about independence, self-growth, and the power of sisterhood.

Directed by Sandy Brewer, the Ladies in Black team should be incredibly proud. Each department has clearly worked together cohesively to create a world, completely transforming the theatre.

The stage crew silhouettes rearrange various black boxes which, paired with a projector screen, effectively represent a unique space. While simplistic, the set design (Brewer) is incredibly effective, complementing both the lighting (Angela Wei), and the performers themselves. The movement of the cast in the space consistently feels natural and smooth (choreography by Clinton Meneses). From simple dresses to glamorous “model gowns”, the costume design (Polly Crone) is very aesthetically pleasing. This, matched with the hair and make-up (Crone, Kate Ghent, Tyler Dentice), works well to establish the time period and enhance each character’s personality.

Each cast member is a unique asset to the story arc and musical numbers. Several performers have multiple characters to play, and it’s entertaining to watch their dispositions change with each role. A stand out for me is Canton. Complementing her effectively awkward and wholesome portrayal of Lisa, Canton’s vocals sound like they were made deliberately for musical theatre.

The highlight of the show is one of the many incredible musical numbers (sound design by Don Blackmore and Steve Morrison, musical direction by Sue Windsor). Brewer, portraying the mother, is accompanied by her daughters (Megan Neill, Carys Tidy, Sophie Russell) to deliver an incredible rendition of He’s a Bastard. The tune itself is hilarious, and paired with the performers’ dead-pan expressions, it’s easily a crowd favourite.

While the script is somewhat outdated, this production of Ladies in Black accentuates the strong feminist themes with pertinent irony, compassion, and straight up fun.