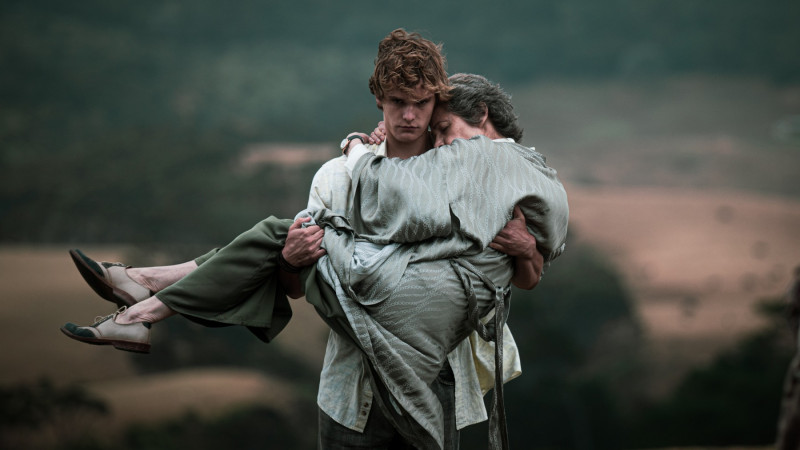 Despite Charlotte Rampling’s mesmerising performance, Juniper often feels like a self-aggrandising hodgepodge, so in awe of its star that it loses sight of what the story is trying to achieve. Though it touches on suicide, isolation, mortality, and familial disconnect, the film’s primary message seems to be, ‘can you believe it? We got Charlotte Rampling!’

Juniper introduces George Ferrier as Sam, a self-destructive 17-year-old who begrudgingly returns home from boarding school for the weekend with his dad Robert (Márton Csókás), with whom he barely speaks. There he meets his wheelchair-bound grandmother Ruth (Rampling), a viciously demanding former war photographer with a love for the bottle who has returned to New Zealand from England, and a battle of wills begins.

From that brief synopsis, you might assume Sam is our lead, and I think he is, but the filmmakers don’t. While the opening sequences paint a vivid (if not slightly ham-fisted) portrait of teen angst, the second Ruth is introduced, all that falls by the wayside. To utilise Rampling’s talents sparingly would have been a brave and effective creative decision, but writer-director Matthew Saville loses his nerve early, and Juniper quickly becomes a novelty vehicle for Rampling that follows a trajectory we’ve explored on screen time and time again.

The temptation to give Rampling as much screen time as possible is understandable; she is undeniably magnetic. Poised and charming despite the vile nature of her character, it’s hard to imagine the film would have sustained my gaze had it not been for her ability to add pathos to every line. Ruth, however – like much of the ensemble – is severely underwritten, particularly apparent when the script attempts to break silence with humour; in other words, she says “f**k” a lot, which as we all know, is a very naughty word for an old woman to use.

Sarcasm aside, many people will still find ways to connect with Juniper. Its characters, though somewhat synthetic, are inherently relatable and its story tried and true. In a year of red-hot Kiwi releases, Juniper just isn’t the standout it should be.