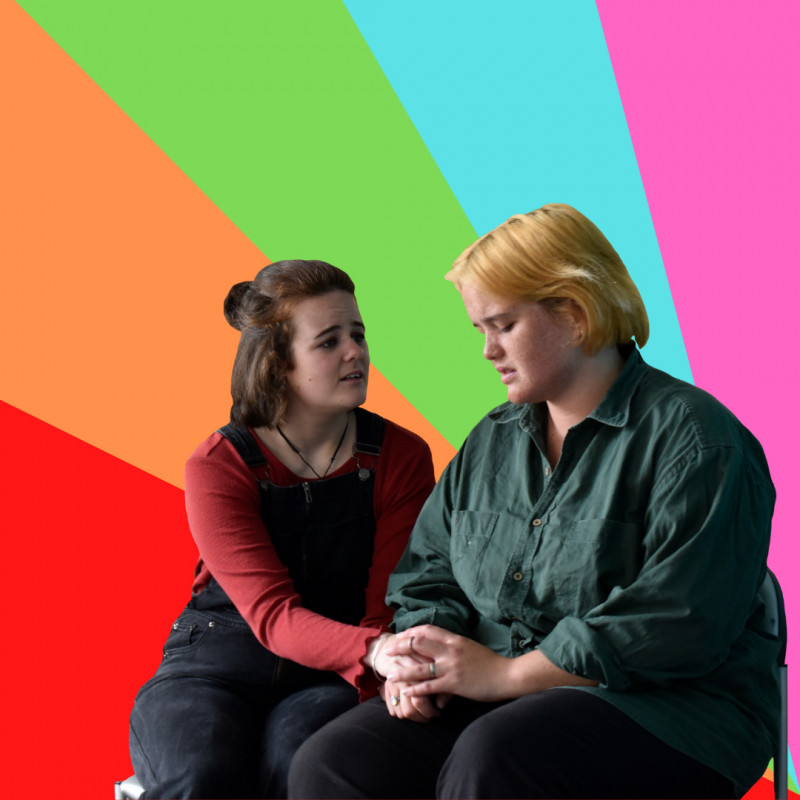 It’s not often I see a piece of theatre where I can relate to a little bit of every character.

INTROSPECTION deals with the topic of mental health, depicting characters who each have a different battle to overcome. While the content warnings for this piece are extensive, I feel that the script treats the topics very delicately, touching on dark themes somewhat vaguely. We watch the characters develop, working towards the end goal of ‘leaving’ the space, or walking through the door into the unknown. The five characters are distinguishable by the colours which represent them, and by what appears to be their personality types and coping mechanisms.

Upon entering the space, I’m immediately intrigued; the set comprises several black boxes with painted abstract faces. At the back of the stage, against a wall of more faces, is a door. The set itself is simple, yet incredibly artistic and fits well with the overall piece.

The use of coloured lights (Bekky Boyce) helps to direct the audiences’ focus onto each character, and is an aesthetically satisfying and effective way to aid transitions. Sound (Boyce) is also a key element in the narrative, for it is what drives the characters toward the door, either pushing them to go through or scaring them away.

The dynamic between the actors on stage is truly comforting to watch; despite the conflict in the story, it is clear that these actors (Htoo Paw Thin, Ngarongonui Mareikura-Ellery, Kerris O’Donoghue, Liv Woodmass, and Kezia Thompson) have been working hard together to depict the complex and beautiful relationships we see in INTROSPECTION.

Unfortunately I often find myself confused about the literal setting, which is never made clear throughout the piece. I bounce between thinking it’s set in an individual’s mind, in a psychiatric ward, in a house which the occupants feel unable to leave; eventually I settle on the conclusion that it’s perhaps an abstract symbolisation of all of those things.

Overall, this was unlike anything I’ve seen before. With the creative staging and lighting, and the beautiful performances, INTROSPECTION is not one to miss.