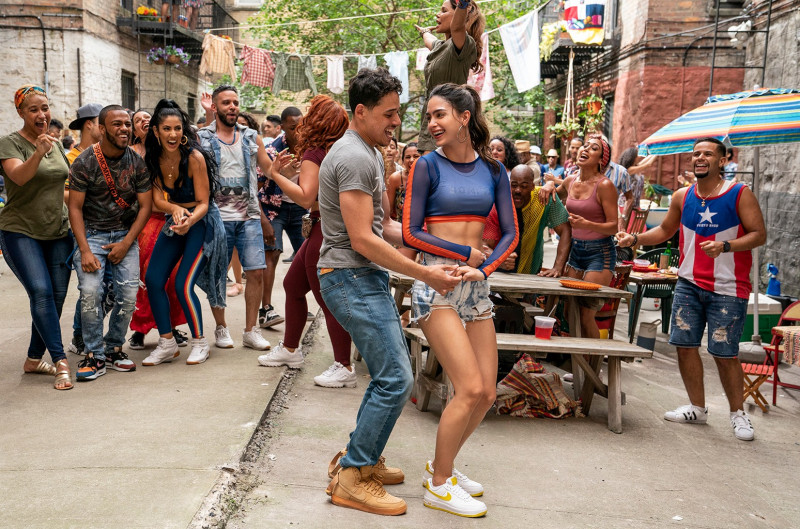 While it’s invigorating to see Latino culture embraced in a big-budget movie musical, this is about the only aspect of In the Heights that feels fresh. Predictable from frame one, musically and emotionally repetitive, and visually sporadic, this one should have stayed on the stage.

Based on the Tony Award-winning musical by Quiara Alegría Hudes and Lin-Manuel Miranda (Hamilton), In the Heights introduces us to Usnavi de la Vega (Anthony Ramos), a bodega owner in Washington Heights, New York, who dreams of reconnecting with his people in the Dominican Republic. With the help of his abuela (Olga Merediz), friends, and Vanessa (Melissa Barrera), the apple of his eye, Usnavi may find he’s been home all along.

It’s hard to believe that a film with hundreds of extras, Latin and hip-hop inspired songs, and people dancing on the sides of buildings could be dull, but here we are. While I can see how this would’ve felt like a ray of sunshine when it first graced the Broadway stage in 2008, in 2021, it’s already outdated. Most characters are stuck, waiting for that big break to come along so they can show the world their potential. Familiar terrain, sure, but many other movie musicals, even recent ones, have managed to make this feel exciting and original. In the Heights feels worn out, tired.

Director Jon M. Chu (Crazy Rich Asians) seems addicted to excess, and it culminates in a whole lot of flourish and a lack of result. The film is vibrant without pause, to the point where I simply needed something – the look, the music, the characters – to change. It’s as if Chu’s storyboards simply read ‘more… more… MORE… roll credits’.

Some catharsis comes courtesy of support players, many of whom manage to bring gravitas to their characters beyond what’s on the page, specifically Corey Hawkins, Jimmy Smits, and Daphne Rubin-Vega. Choreographer Christopher Scott also brings his A game, providing lively dances that I only wish had been captured more effectively. Even with these moments of elation, I found myself breathing a sigh of relief when the credits finally rolled.