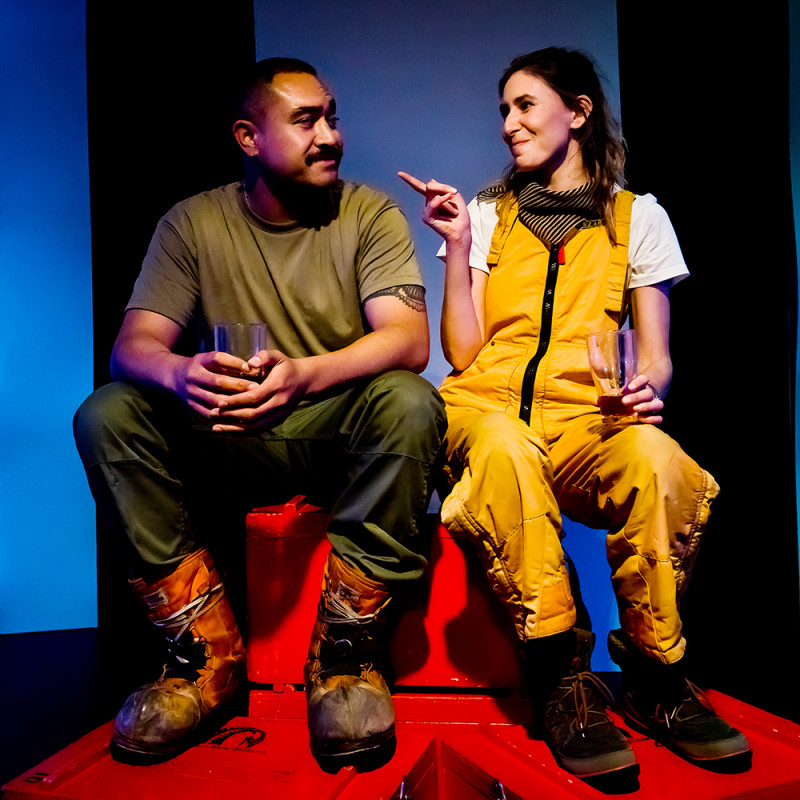 Running at Circa Theatre until 18th Dec 2021

Antarctica is a heartbeat. Once a year it doubles its size, and then retracts. For millennia. One heartbeat.

Set in the 1980s, HOLE follows Greenpeace activist Bonny (Stevie Hancox-Monk), US Navy SEAL Ioane (Sepelini Mua’au), and Kiwi ozone scientist Stella (Elle Wootton) as they navigate not only a complex love triangle but also a clash of perspectives. Though vastly different in their ideologies, motivations, sexual orientations, and cultures, they learn that they all have one thing in common: their reverence and yearning to protect that which cannot protect itself; Antarctica.

A powerful call to action, HOLE is very clear in its intentions. Lynda Chanwai-Earle calls upon each and every one of us to recognise our impact and responsibility towards our climate crisis. By likening the continent to a heartbeat, Antarctica is rendered human, and suddenly we become intrinsically connected to what seemed like an abstract social phenomenon. By placing the climate crisis alongside other social issues such as racism, sexism, LQBTQIA+ rights, reparative justice, and global politics, climate change suddenly becomes a more pressing, urgent, even vital issue.

It is not only what HOLE says however but what HOLE does that is most commendable and inspiring. HOLE is eco-powered off-grid. Powered by Ice Floe Productions Tapui Ltd through solar and wind, the specially designed LED lights (lighting design by Isadora Lao) and sound production (sound design by Phil Brownlee, compositions by Gareth Farr ONZM, and AV design by Rachel Neser) aim to draw off only one-tenth of the power of normal theatre productions. On top of that the beautiful set, collaboratively designed by Jason O’Hara alongside directors Kerryn Palmer and Sally Richards, is made from recycled and repurposed materials, along with the props and costumes. Even the wind turbine and solar panels that were originally donated have been repurposed from Chanwai-Earle’s past show HEAT.

HOLE is not only a story underscoring the climate crisis and urging us to make change; HOLE goes one step further and enacts that change. This production goes sustainably on tour across Aotearoa New Zealand in 2022 and everyone should see it.