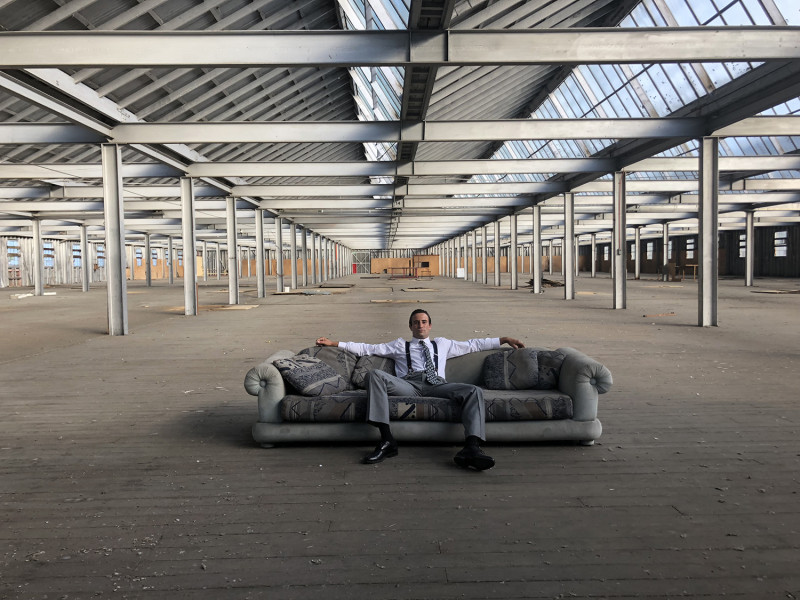 Written by and performed by Cameron Jones

It’s the early 1980s and Henry Lewis, in a world of nobodies, wants to be a somebody. After a shaky start door-knocking to pitch property deals, he becomes a top real estate salesman, then successfully invests in stocks and shares. He finally achieves his dream of building New Zealand’s first New York-style, deluxe high-rise apartment building in Auckland’s Herne Bay, the Shangri-La (which is still there).

Described as a “solo adventure”, High Rise is a captivating one-man work of extraordinary physical theatre that started life as a Toi Whakaari student project and has grown and expanded into a fully fledged, award-winning tale of hubris and excess. It draws on the Ancient Greek myth of Icarus as Henry’s dubious moral choices lead him to fly too close to the metaphorical sun of financial affluence, causing him to crash and burn.

Cameron Jones uses little more than his body, a briefcase, swivel chair, hard hat, and a stack of papers, plus some well-placed lights and music, to tell Henry’s story. With clown work, self-created sound effects, and outstanding physicality, he brings us along on the road of ‘greed is good’ in an entirely original way. Anyone who remembers the 80s will revel in this yuppie character you love to hate, but this is one who can stand on his head on top of a briefcase holding a yoga pose while cheesy affirmations play.

Jones’ physical theatre prowess makes High Rise highly entertaining and fun, while posing interesting moral questions about the human desire for wealth and status. If you’re sitting in the front row, expect to be drawn literally into Henry’s world as Jones breaks the fourth wall and ad libs with the audience. The poignant ending to the story is a stab in the heart.

High Rise combines great storytelling with strong characterisation and unique presentation from an entirely committed actor to create a production that will leave you pondering the meaning of success long after you leave the theatre.