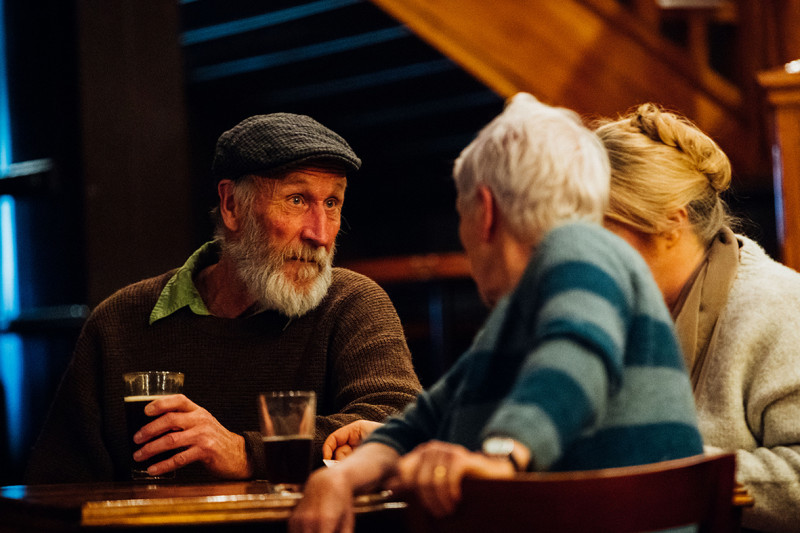 Four Nights in the Green Barrow Pub is a play in a pub. To anyone wondering how that might work, I can now provide an answer: in the hands of Red Scare Theatre Company, it works a treat!

Darragh (Finlay Langelaan) has inherited the Green Barrow from his late father. He keeps the pub exactly the same – even down to the expired Midori and the dangerous step at the front door. But when his sister Aisling (a sassy performance filled with soul from Aimee Sullivan) returns home from her travels, and handsome stranger Arad (Alex Rabina) shows up at the door (mind the step), Darragh discovers life doesn’t get better by chance; it gets better by change.

Four Nights in the Green Barrow Pub is a wonderful gay love story about finding your place in the world within and without your family. Darragh and Arad’s relationship is one that makes my face hurt from smiling. Their tender affection for each other is heightened by two talented actors who deliver chemistry in spades.

Each character is carefully crafted and lovingly brought to life by a playwright, director, and cast working seamlessly as one. Performances simmer and boil at just the right moments thanks to great instincts honed by Tse’s guiding hand. Hilary Norris as Nuala, Karen Anslow as Caitlin, and Ralph Johnson as Glendon (all three of whom are hilarious) round out a committed cast that doesn’t bat one eyelash at the noise of the pub below. The rising rowdiness often serves the play beautifully, but does detract from the sweeter moments for me.

Four Nights in the Green Barrow Pub features the best incorporation of music I’ve seen in a long while, with stomping Irish songs played by an effervescent band of Sullivan, Emily Griffiths, Thomas Whaley, and musical director Michael Stebbings. I so wish the audience had been invited to join in, if only to add to the joy of an evening already overflowing with it.